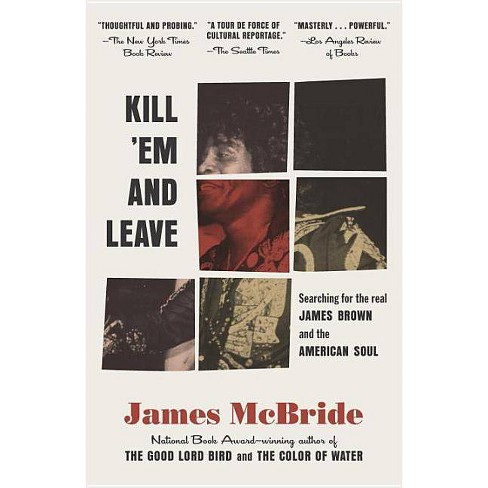 "You won't leave this hypnotic book without feeling that James Brown is still out there, howling."--The Boston Globe From the New York Times bestselling author of The Good Lord Bird, winner of the 2013 National Book Award for Fiction, Deacon King Kong, and Five-Carat Soul Kill 'Em and Leave is more than a book about James Brown. Brown embodied the contradictions of American life: He was an unsettling symbol of the tensions between North and South, black and white, rich and poor. After receiving a tip that promises to uncover the man behind the myth, James McBride goes in search of the "real" James Brown. McBride's travels take him to forgotten corners of Brown's never-before-revealed history, illuminating not only our understanding of the immensely troubled, misunderstood, and complicated Godfather of Soul, but the ways in which our cultural heritage has been shaped by Brown's enduring legacy. Praise for Kill 'Em and Leave "A tour de force of cultural reportage."--The Seattle Times "Thoughtful and probing."--The New York Times Book Review "Masterly . . . powerful."--Los Angeles Review of Books

"McBride provides something lacking in most of the books about James Brown: an intimate feeling for the musician, a veracious if inchoate sense of what it was like to be touched by him. . . . It may be as close [to 'the real James Brown'] as we'll ever get."--David Hajdu, The Nation "A feat of intrepid journalistic fortitude."--USA Today "[McBride is] the biographer of James Brown we've all been waiting for. . . . McBride's true subject is race and poverty in a country that doesn't want to hear about it, unless compelled by a voice that demands to be heard."--Boris Kachka, New York "Illuminating . . . engaging."--The Washington Post "A gorgeously written piece of reportage that gives us glimpses of Brown's genius and contradictions."--O: The Oprah Magazine

Praise for Kill 'Em and Leave "Thoughtful and probing . . . with great warmth, insight and frequent wit." --The New York Times Book Review "McBride's true subject is race and poverty in a country that doesn't want to hear about it, unless compelled by a voice that demands to be heard." --New York Magazine "Masterly . . . powerful . . . McBride provides an invaluable service to the history of R&B." --Los Angeles Review of Books "A feat of intrepid journalistic fortitude." --USA Today "An important book about an important figure in American musical history and about American culture." --The Boston Globe "Illuminating . . . engaging." --The Washington Post "A gorgeously written piece of reportage that gives us glimpses of Brown's genius and contradictions." --O: The Oprah Magazine "The definitive look at one of the greatest, most important entertainers, The Godfather, Da Number One Soul Brother, Mr. Please, Please Himself--JAMES BROWN." --Spike Lee

James McBride is an accomplished musician and the author of the National Book Award-winning novel The Good Lord Bird, the bestselling American classic The Color of Water, the novels Song Yet Sung, Miracle at St. Anna, and Deacon King Kong, the story collection Five-Carat Soul, and Kill 'Em and Leave, a biography of James Brown. The recipient of a National Humanities Medal, McBride is also a Distinguished Writer in Residence at New York University.
If the item details above aren’t accurate or complete, we want to know about it. Report incorrect product info.