Kingdom of Ash - Throne of Glass - by Sarah J. Maas 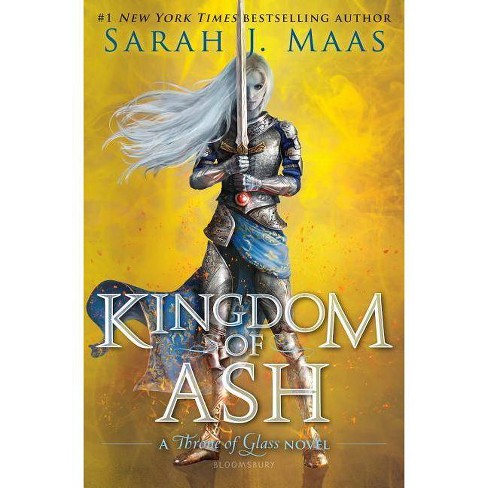 Years in the making, Sarah J. Maas's #1 New York Times bestselling Throne of Glass series draws to an epic, unforgettable conclusion. Aelin Galathynius's journey from slave to king's assassin to the queen of a once-great kingdom reaches its heart-rending finale as war erupts across her world. . .

Aelin has risked everything to save her people-but at a tremendous cost. Locked within an iron coffin by the Queen of the Fae, Aelin must draw upon her fiery will as she endures months of torture. Aware that yielding to Maeve will doom those she loves keeps her from breaking, though her resolve begins to unravel with each passing day... With Aelin captured, Aedion and Lysandra remain the last line of defense to protect Terrasen from utter destruction. Yet they soon realize that the many allies they've gathered to battle Erawan's hordes might not be enough to save them. Scattered across the continent and racing against time, Chaol, Manon, and Dorian are forced to forge their own paths to meet their fates. Hanging in the balance is any hope of salvation-and a better world. And across the sea, his companions unwavering beside him, Rowan hunts to find his captured wife and queen-before she is lost to him forever. As the threads of fate weave together at last, all must fight, if they are to have a chance at a future. Some bonds will grow even deeper, while others will be severed forever in the explosive final chapter of the Throne of Glass series.

"Fans will delight in this gorgeous edition. . . . Action-packed and full of insight into Celaena's character. . . . What a ride!" --Booklist on The Assassin's Blade

"A thrilling read." --Publisher's Weekly on Throne of Glass "A must-read for lovers of epic fantasy and fairy tales." --USA Today on Throne of Glass "Fans of Tamora Pierce and George R.R. Martin, pick up this book!" --RT Book Reviews on Throne of Glass "An epic fantasy readers will immerse themselves in and never want to leave." --Kirkus Reviews on Crown of Midnight "A thrill ride of epic fantasy proportions." --USA Today on Crown of Midnight "With assassinations, betrayal, love and magic, this novel has something to match everyone's interests." --RT Book Reviews on Crown of Midnight "Celaena is as much an epic hero as Frodo or Jon Snow!" --Tamora Pierce, New York Times bestselling author on HEIR OF FIRE "Maas shines as a brilliant storyteller. . . . The most exhilarating installment yet." --RT Book Reviews on Heir of Fire "Impossible to put down." --Kirkus Reviews on Queen of Shadows "Beautifully written prose and brilliantly crafted plots come together in this entry of the awe-inspiring fantasy series that will leave readers anticipating the next volume." --SLJ on Queen of Shadows "Tightly plotted, delightful escapism." --Kirkus Reviews on Empire of Storms "Sarah J. Maas turns a corner from sprawling epic to thrilling psychological fantasy....A worthy new chapter in the Throne of Glass saga." --HuffPost

Sarah J. Maas is the #1 New York Times and internationally bestselling author of the Court of Thorns and Roses series, as well as the Throne of Glass series. Her books are published in over thirty-six languages. A New York native, Sarah lives in Pennsylvania with her husband and dog.

www.sarahjmaas.com
www.facebook.com/theworldofsarahjmaas
Instagram: therealsjmaas
If the item details above aren’t accurate or complete, we want to know about it. Report incorrect product info.