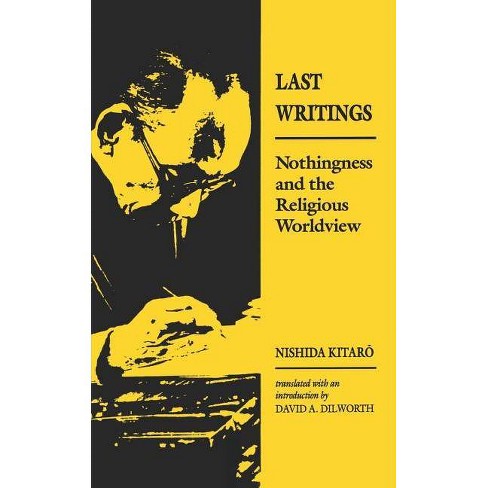 $21.49
0 out of 5 stars with 0 reviews
be the first!be the first! ratings
Shipping
Free standard shipping with RedCard
Help us improve this page

Nishida Kitarï¿½, Japan's premier modern philosopher, was born in 1870 and grew to intellectual maturity in the final decades of the Meiji period (1868-1912). He achieved recognition as Japan's leading establishment philosopher during his tenure as professor of philosophy at Kyoto University. After his retirement in 1927, and until his death in 1945, Nishida published a continuous stream of original essays that can best be described as intercivilizational, a meeting point of East and West.

His final essay, The Logic of the Place of Nothingness and the Religious Worldview, completed in the last few months before his death, is a summation of his philosophy of religion and has come to be regarded as the foundational text of the Kyoto school. It is one of the few places in his writings where Nishida draws openly and freely on East Asian Buddhist sources as analogs of his own ideas. Here Nishida argues for the existential primordiality of the religious consciousness against Kant, while also critically engaging the thought of such authors as Aristotle, the Christian Neo-Platonists, Spinoza, Fichte, Hegel, Barth, and Tillich. He makes it clear that he is also indebted to Pascal, Kierkegaard, and Dostoievsky as well as to Nï¿½gï¿½rjuna, the Ch'an masters, Shinran, Dï¿½gen, and other Buddhist thinkers. This book--a translation of the most seminal work of Nishida's career--also includes a translation of his Last Writing (Zeppitsu), written just two days before his death.
If the item details above aren’t accurate or complete, we want to know about it. Report incorrect product info.