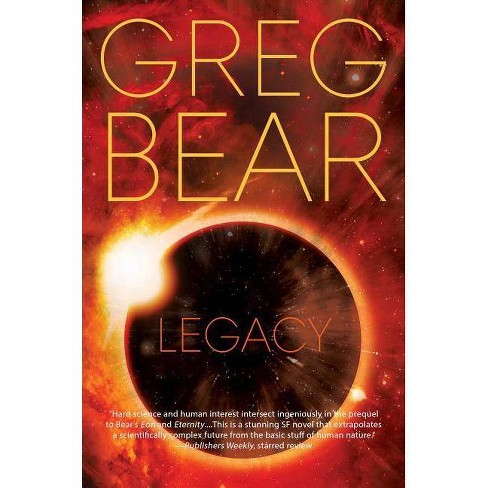 $18.04
MSRP$18.99
no reviews yet
be the first!be the first! ratings
Shipping
Free standard shipping with RedCard
Help us improve this page

"Hard science and human interest intersect ingeniously in the prequel to Bea's Eon and Eternity....This is a stunning SF novel that extrapolates a scientifically complex future from the basic stuff of human nature." --Publishers Weekly, starred review, on Legacy

"Whether he's tinkering with human genetic material or prying apart planets, Bear goes about the task with intelligence and a powerful imagination." --Locus on Greg Bear

"A cohesive and original vision of the future. Bear has combined a lively set of characters, colorful writing and gripping psychological-technological fabrications into a very seductive read." --People Magazine on Queen of Angels

"Bear is one of our very best." --New York Daily News on Greg Bear

"If anyone is the complete master of the grand scale SF novel, it's Bear." --Booklist on Greg Bear

"Bear, who's won two Hugos and four Nebulas, should rack up nominations if not wins for this one as well." --Publishers Weekly, starred review, on Slant