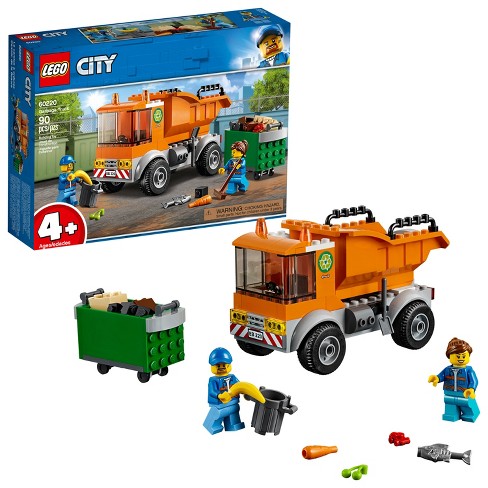 $19.99
4.8 out of 5 stars with 20 reviews
2020 ratings
WARNING: choking hazard - small parts. Not for children under 3 yrs.
Shipping
Free standard shipping with RedCard
Help us improve this page

Help your child keep LEGO City clean with the neat 60220 Garbage Truck This industrious LEGO 4+ vehicle set is made to be fun and easy for preschoolers and younger children
If the item details above aren’t accurate or complete, we want to know about it. Report incorrect product info.

This set is ok. To me although it is weird that the back of the truck is open
1 guest found this review helpful. Did you?
Report review

Worth the money. Almost.

4 out of 5 stars
ElderTalkativeSalad2 - 8 months ago
originally posted on shop.LEGO.com

I suppose that I must start out this review by admitting that I honestly bought this set for my almost-30-year-old self. I bought this set in conjunction with the Food Accessories Extra pack, primarily because I noticed that this set contains a carrot without a carrot top, whereas the Extra pack contains an extra carrot top. I was initially worried that this set might not come with two roller skates, but my fears there were unfounded - one of the (very few) extra elements in this set is a second roller skate! Now to the reasoning behind this review's title. For starters, I grew up with the LEGO Town and City Center sets, and have grown accustomed to seeing LEGO sets that include a pushbroom come with a black shovel. Alas, this set, like so many other City sets these days, comes with a dark gray shovel to compliment the pushbroom. I was slightly disappointed, also, by the lack of proper handholds for the second minifigure, who is left to try to hold on to the 1X6 Hangers on the dump bed - barely! The printing on the printed elements is crisp, but, unfortunately, more translucent than the images show, especially on the bumper element. I was a bit taken aback, also, by the fact that the designer only saw fit to provide one bumper element - the rear of the model looks a bit bare without one. Finally, the dumpster has to be picked up to latch onto the back of the dump bed; most children wouldn't think twice about this, but as someone on the Autism spectrum, I can tell you that kids who are also on the spectrum would be a little bit frustrated by this lack of operational realism. In light of this, the dumpster in my set - as well as the latch on the back of the dump bed - got taken apart fairly quickly. The two dark gray plates with the bar on the sides have since seen new life as handholds on the sides of the cab, while the green panels will eventually be integrated into a grain truck which I have designed to go with my Harvester Transport set (please see my review of that set). With all of this in mind, I stand by my statement that I would, in fact, recommend this set to a friend. The build is simple and fun, and I do believe that I was able to complete it in about ten minutes or less, a personal record for a non-Advent Calendar model, I believe! Any child, spectrum or not, will appreciate the larger pieces and easy-to-build design, and I believe that that is why this set is worth the money. Almost.
Did you find this review helpful?
Report review

5 out of 5 stars
CRAD - 11 months ago
originally posted on shop.LEGO.com

My 5 year old son and I built this garbage truck set pretty quickly. It is durable and fun to play with.
2 guests found this review helpful. Did you?
Report review

5 out of 5 stars
PattyTroll - 1 year ago
originally posted on shop.LEGO.com

My nephew birthday present was fun to put together. We started as a team but he just took over. Very cool working truck. Thanks for the fun!
1 guest found this review helpful. Did you?
Report review

5 out of 5 stars
MrBaffledJellyfish - 1 year ago
originally posted on shop.LEGO.com

Great truck. A must add to your Lego city. Very glad I added to mine.
2 guests found this review helpful. Did you?
Report review

5 out of 5 stars
LittleLegoBuilderMom - 1 year ago
originally posted on shop.LEGO.com

My son received this as a birthday present and it made his day! He received other LEGO kits but this kit is the only one he will play for hours and hours. Thank you for making this set!
2 guests found this review helpful. Did you?
Report review