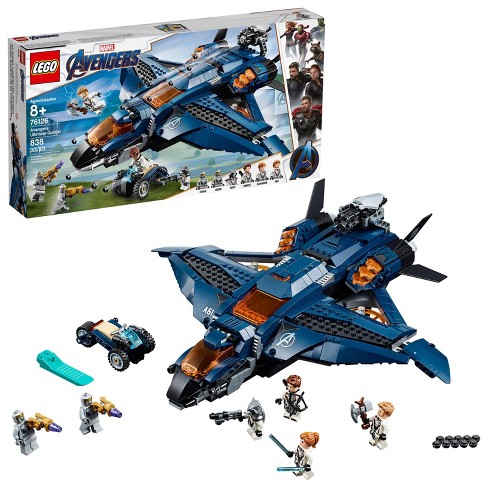 $79.99
4.6 out of 5 stars with 66 reviews
6666 ratings
WARNING: choking hazard - small parts. Not for children under 3 yrs.
Shipping
Free standard shipping with RedCard
Loading, please wait...
Help us improve this page

Let the youngsters role-play as legendary superheroes with the LEGO Marvel Avengers Ultimate Quinjet building set. Fun to build solo or with friends, the Quinjet has loads of cool features including an opening Minifigure cockpit, adjustable wings and spinning rotors. It also packs some serious firepower with its 2 stud shooters, plus a fold-out 6-stud rapid shooter and a removable, stud-shooting trike in the rear compartment. This 838-piece playset has 6 Minifigures-including Black Widow, Hawkeye, Rocket and Thor, all with new-for-March-2019 Avengers team suit decoration. And there are lots of Minifigure accessories so kids can role-play thrilling scenes from the Marvel Avengers movies and create their own original adventures.
If the item details above aren’t accurate or complete, we want to know about it. Report incorrect product info.

5 out of 5 stars
tibor - 3 months ago
originally posted on shop.LEGO.com

this lego set is definitely worth the money and is much better than 76131 compound battle (sorry!) it doesn't take up much space at all but seems MASSIVE at the same time, the things that i would improve would be the back of the quinjet being less plain and the minifigure to be able to look foward on the trike. all in all a great set.
Did you find this review helpful?
Report review

5 out of 5 stars
Would recommend
DanaB - 3 months ago, Verified purchaser
Great set! My son has A LOT of Legos and says this is one of his favorites. It took him several hours to put it together and has been playing with it ever since.
2 guests found this review helpful. Did you?
Report review

A must have Avengers set.

5 out of 5 stars
Rbbb - 3 months ago
originally posted on shop.LEGO.com

As a higher priced LEGO set, the Avenger’s Ultimate Quinjet is a well proportioned and nicely detailed Minifigure scale vehicle. This set comes with Endgame Time-Suit versions of Blackwidow, Hawkeye, Thor and Rocket the Racoon in addition to their various weapon elements. It also includes two Chitauri Minifigures and weapon elements. As far as the build went, it was easy to follow the instructions and a breeze to assemble, with no real construction challenges or difficulties to speak of. A fun and decent length build, I was quite impressed by the final result. The only thing missing for me was that all of the Avenger’s Time-Suit printed torso pieces are identical across the entire range of characters, with no variation for Iron Man’s or Warmachine’s Time-Armours and Blackwidow’s lacking a female contour print. Overall I highly recommend this LEGO set and count it as a worthy inclusion to my LEGO MARVEL Superheroes collection.
2 guests found this review helpful. Did you?
Report review

My 1st quinjet, and I love it

5 out of 5 stars
that1dude - 3 months ago
originally posted on shop.LEGO.com

This is one of the best marvel sets of all time. I've never had a quinjet and this is an awesome set. The figures are ok, all of them have the quantum suits, they look good but I'm sick of them in so many sets. The set itself is the jet and this little bike that I didn't even build. It has so much space inside! Room for about ten figures if you take out the slanted black grates and take out some gray tiles. It can only be accessed in the middle top and the back bay door, I wish all the roof could open for extra ease. I also took out the stud shooter for more hand room. The blue and the orange complement each other very well and it has the styling of the jet that attacks cap on the bridge in The Winter Soldier. All in all its an awesome set that's worth the money and will be a great addition to any collection.
1 guest found this review helpful. Did you?
Report review

Another quinjet in the series

4 out of 5 stars
Ld81 - 6 months ago
originally posted on shop.LEGO.com

this build has some fun features . New building style for a quinjet and is great size. The characters featured are good, but not great, but I did have fun building as well as it looks great on display with my other sets. My kids play with it and it holds together well only a few parts try to fall off but are easy to place back. Time spent with my kids while building it. Worth it.
1 guest found this review helpful. Did you?
Report review

2 out of 5 stars
Brickochet - 8 months ago
originally posted on shop.LEGO.com

I am typically hyped about legos planes/ships as their designs are straight up, hands down, legit and epic boss mode. Unfortunately for me, this set just has so many oddities going on that it's actually difficult to process appropriately. Less, toss out the window the main neg hit for this entire wave - which is none of it (except maybe the compound - and the quantum suits) are actually accurate to the film. Though, as the box simply states "Avengers" and not endgame I am fairly certain that there was so much mystery for creating the set to avoid any possible spoilers. It seems more so and evidential that your designers were probably told to pay homage to the OG 6. So, I think that actually works more so in your favour. Caps bike mainly from AoU, War Machine buster - wasn't even a thing in any film, Quinjet featured in many excluding endgame primarily hawk/widow, and hall of iron mainly iron man installments. This aside I'll roll out the cons: 1) the prices are quite whacko. The compound at 699 pieces being 139.99 CAD and this quinjet being 838 pieces but 99.99 CAD (difference of 139 pieces and $40) is just super strange. Kinda says this one is worth it's price and the compound, really isn't. 2) The build, is really amazing, but at about halfway, I was realizing that there's an unfortunate drawback that I was hoping would come in the next bag, until it didn't occur at all. That being, the bottom is flat but it is trying to feature a ramp at the back of the ship? :s where's some legs? or some kind of stand to prop it up? - a side project I thinks x=. 3) Inaccurate: I am a fairly huge MCU fan, and I really don't recall a cannon being at the top of the quinjet. I can only remember it dropping down from the nose of the ship in the first avengers targetted at Loki?? so why was it placed in the back? and reiterating my 2nd point: why not at the front to be accurate and include landing gears/or propping stilts? 4) Fragile and awkward spots: The front cockpit window, doesn't like to be opened and closed. It's held on by 2 pegs only, so when opening - the windshield /always/ comes off on me. 2nd: the 2nd overhead window. This particular spot urks me greatly as I tried numerous times to connect the window with it's covering - but it's actually about half a peg off from being able to do so. Which in the pics on the box and OCD lining up - is irritating. ANNND lastly, the openess of the wings make it look a bit cool in a way, but also more hollow than it actually is. 5) The trike. I wish I had taken separate photos of this but alas I forgot to. My intial thoughts were it actually looked cool, but then I tried to attach hawkeye to it and found it to be quite difficult. The "seat" isn't really a seat to sit a minifig at, its more of a 'bed'. In one way it's actually an accurate look... but fails in practicality use for play and/or scene set up. It's better left empty stored in the plane, or scraped and made into something better. There's no where to attach hawks bow, so why keep his quiver on it? Conish/Pro: The ramp just doesn't function with this flat design, even though it shows it as that function on the box. I preferred to, flip it so when the hatch is closed it actually looks finished instead of leaving an unfinished look like the benetar of the infinity war series. Pro: If you can look past all of the above then at the end of the day; as a lego fan/addict it is really fun to build. as an MCU fan, it's nice to have. Overlooking the basic appearance and setting it up just right - it does look really good, and the tealish/aqua brick separator tool is a very nice colour and change from the orange one.

2 guests found this review helpful. Did you?
Report review

1 out of 5 stars
PatMc - 8 months ago
originally posted on shop.LEGO.com

Out of the 5 bags in the set, the first four were missing a total of 20 pieces. Quality control on this item was a F-- The only bag that had all pieces was the fifth. This was SO disappointing. I would start building, and have to pause 10 days for the missing parts to arrive - four times. This is so unlike LEGO. I hope this is not indicitive of the new LEGO.

Oh no! We're sorry to hear that this set gave you some trouble. It's incredibly unusual for a LEGO® set to be missing any parts, let alone that many. Most of the time, builders end up finding those pesky pieces just stuck in the packaging, or maybe hiding away on the floor. In the rare case something does happen, we always want to make sure to get you building again with free replacement parts from LEGO.build/Service. And we'll always make sure our Quality team hears your feedback; that way they can make sure this doesn't happen again.
4 guests found this review helpful. Did you?
Report review