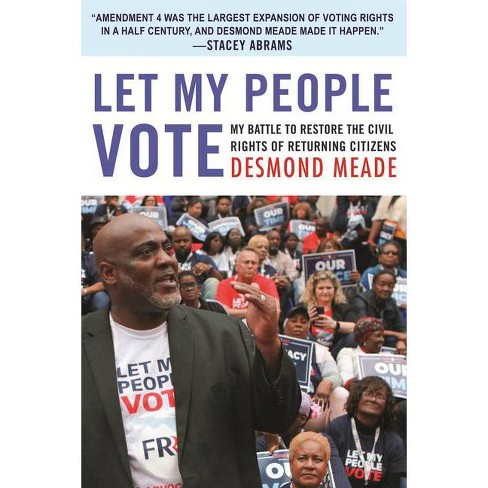 "Desmond Meade tells the story of his fight to pass Amendment 4 in Florida, which would restore voting rights to felons who have served their terms"--

Desmond Meade was chosen as a MacArthur Fellow in 2021
The inspiring and eye-opening true story of one man's undying belief in the power of a fully enfranchised nation. "You may think the right to vote is a small matter, and if you do, I would bet you have never had it taken away from you." Thus begins the story of Desmond Meade and his inspiring journey to restore voting rights to roughly 1.4 million returning citizens in Florida--resulting in a stunning victory in 2018 that enfranchised the most people at once in any single initiative since women's suffrage. Let My People Vote is the deeply moving, personal story of Meade's life, his political activism, and the movement he spearheaded to restore voting rights to returning citizens who had served their terms. Meade survived a tough childhood only to find himself with a felony conviction. Finding the strength to pull his life together, he graduated summa cum laude from college, graduated from law school, and married. But because of his conviction, he was not even allowed to sit for the bar exam in Florida. And when his wife ran for state office, he was filled with pride--but not permitted to vote for her. Meade takes us on a journey from his time in homeless shelters, to the exhilarating, joyful night in November of 2018, when Amendment 4 passed with 65 percent of the vote. Meade's story, and his commitment to a fully enfranchised nation, will prove to readers that one person really can make a difference.

"[An] appealing debut memoir . . . This poignant account soars."
--Publishers Weekly "This is a moving and triumphant story of how ordinary citizens can make a difference."
--Booklist "Desmond Meade is one of my personal heroes, and his story is an inspiration for all those who aim to build a radically more inclusive democracy."
--Michelle Alexander, The New Jim Crow

Desmond Meade is the president of the Florida Rights Restoration Coalition, chair of Floridians for a Fair Democracy, and a graduate of Florida International University College of Law. As a formerly homeless returning citizen, he fought to restore voting rights to over 1.4 million Floridians with past felony convictions. He was recognized by Time as one of the 100 Most Influential People in the World in 2019. Today, Desmond continues fighting against new restrictions placed on Florida voters that have been likened to Jim Crow laws. Desmond and his wife and five children live in Florida. Connect with him @desmondmeade.
If the item details above aren’t accurate or complete, we want to know about it.