Let's Call It a Doomsday - by Katie Henry (Hardcover) 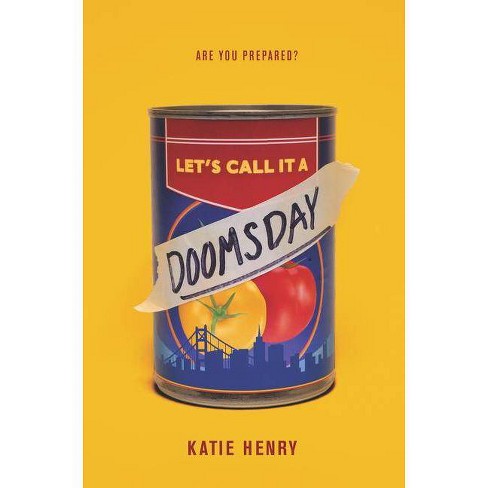 Ellis Kimball, sixteen, whose anxiety disorder causes her to prepare for the imminent end of the world, meets Hannah, who claims to know when it will happen.

An engrossing and thoughtful contemporary tale that tackles faith, friendship, family, anxiety, and the potential apocalypse from Katie Henry, the acclaimed author of Heretics Anonymous.

There are many ways the world could end. A fire. A catastrophic flood. A super eruption that spews lakes of lava. Ellis Kimball has made note of all possible scenarios, and she is prepared for each one.

What she doesn't expect is meeting Hannah Marks in her therapist's waiting room. Hannah calls their meeting fate. After all, Ellis is scared about the end of the world; Hannah knows when it's going to happen.

Despite Ellis's anxiety--about what others think of her, about what she's doing wrong, about the safety of her loved ones--the two girls become friends. But time is ticking down, and as Ellis tries to help Hannah decipher the details of her doomsday premonition, their search for answers only raises more questions.

When does it happen? Who will believe them? And how do you prepare for the end of the world when it feels like your life is just getting started?

"A rare YA novel in its approach to religious faith as a life-giving, if complicated, aspect of a young adult's life... Ellis is a protagonist to root for."--Publishers Weekly (starred review)

"Most impressive here is Henry's multifaceted take on religion. Come for the arch first-person narrative and puppy love, stay for the examination into belief."--ALA Booklist (starred review)

"Henry treats Ellis' faith with respect and sensitivity while still realistically depicting her struggles to find love and acceptance of herself in a community that is not always supportive of LGBTQ+ individuals... the final few chapters send the reader on a satisfying rollercoaster."--Bulletin of the Center for Children's Books

"A whip-smart and compelling protagonist who grapples with deep questions about the nature of belief, identity, and control... One of the few YA titles with a Mormon protagonist... Humorous dialogue and richly developed supporting characters add to the appeal."--School Library Journal (starred review)

"As Ellis learns to consider the hopeful alongside the negative scenarios, the story rushes toward its intriguing, suspenseful conclusion... A too-rare, well-rounded portrayal of a religious adolescent, from the author of Heretics Anonymous."--The Horn Book

"Genuine and heartfelt doctrinal questions arise in between the pranks and the conversations Michael has with his new friends, allowing both believing and nonbelieving readers to find their way into this exploration of the way feelings about family and faith intersect. A balanced perspective of possibilities of faith and skepticism."--Bulletin of the Center for Children's Books

"In addition to being a frequently hilarious comedy with its share of complicated romance, the story presents a thought-provoking look at faith, questioning but ultimately respectful of Catholicism and other beliefs."--Horn Book Magazine

"The story adeptly asks readers to question what they believe and why, without being preachy, judgmental, or dismissive. Humor interlaced with more serious ideas make for an interesting and enjoyable read. Highly recommended, especially for teens who are passionate about a cause."--School Library Journal
If the item details above aren’t accurate or complete, we want to know about it. Report incorrect product info.