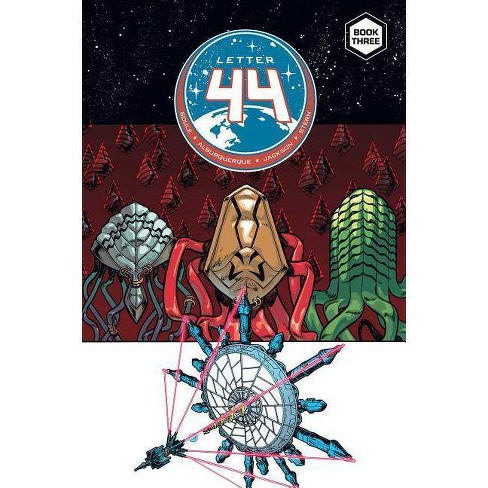 A new oversized, hardcover edition of the critically-acclaimed and award-winning series about presidency and first contact, packed with extras like creator commentary, sketches, concept art, and more! This third volume collects the interstitial one-shots focusing on the astronauts of the Clarke--why they signed up for a one-way trip, and what they hoped to accomplish on their journey--as well as the mysterious Builders, who are responsible for the End, a powerful force that hurtles toward Earth and its billions of inhabitants. President Stephen Blades struggles with how to tell the people of Earth that most of them won't survive the End. But when he learns that even the 666 humans he hand-picked will fall victim to the End, it seems all hope is lost. The same can be said for the crew of the Clarke, crash-landed on Mars after sabotaging the Builders and their escape ship. Now at the mercy of the Builders, who have followed them to the red planet in order to exact revenge, Charlotte and Overholt do what they can to keep their crew alive--for as long as they can hold out. In the eleventh hour, the future of humankind will be left in the hands of those who chose to lead.

Charles Soule was born in the Midwest but often wishes he had been born in space. He lives in Brooklyn, and has written a wide variety of titles for a variety of publishers, including others' characters (Swamp Thing, Superman/Wonder Woman, Red Lanterns (DC); Thunderbolts, She-Hulk, Inhuman (Marvel)); and his own: 27 and Curse Words (Image); Strongman (SLG) and Strange Attractors (Archaia). When not writing--which is rare--he runs a law practice and works, writes and performs as a musician. One of his biggest regrets is never personally witnessing a Space Shuttle launch. Alberto Jiménez Alburquerque (AJA) is an artist born, raised and currently living in Madrid, Spain. He has put lines in French comic-books (BD's) for almost a decade now, working for Paquet Ed. and Soleil Ed. Some of his titles are: Fugitifs de l'Ombre (Paquet), Le Dieu des Cendres (Soleil), and Elle (Soleil). He has also drawn some short stories for the American comics Skull Kickers (Image), Pathfinder: Goblins (Dynamite), and Robert E. Howard's Savage Sword (Dark Horse). He also illustrated Mystery Girl from writer Paul Tobin. What is the most unfair thing you can think of? Got it in your head? Okay, forget that because there's a worse one: There's this guy who gets paid money for coloring comic books. Right. Dan Jackson has been gainfully employed to one degree or another with the coloring of comic books for the better part of 17 years. He's done other Great Big Projects with the fine folks at Oni Press, and he's done a bunch of covers and short projects with them as well. He's a pretty versatile guy. Even writes his own Bios. Mr. Jackson lives in the beautiful Pacific Northwest with his scorching hot wife (see? UN-FAIR!), and two hilarious kids.
If the item details above aren’t accurate or complete, we want to know about it. Report incorrect product info.