Liberty from All Masters - by Barry C Lynn (Hardcover) 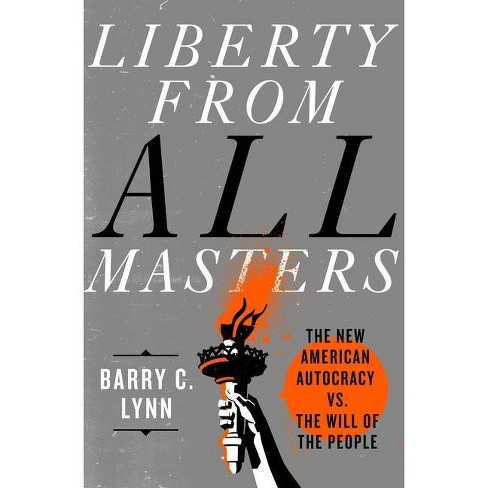 $28.99
new at target¬
0 out of 5 stars with 0 reviews
be the first!be the first! ratings
Help us improve this page

Liberty from All Masters builds on Barry Lynn's lifetime of work analyzing the evils of concentrated private power in America today, and makes a deep critique of the way we have come to think about antitrust. He questions not just whether consumer welfare and efficiency can be measured in a digital economy, but whether they ought to stand as normative standards in a democratic society. A highly provocative and important book.
--Francis Fukuyama, author of Identity: Demand for Dignity and the Politics of Resentment

From the beginning, the citizens of the United States have resisted unchecked power. In the nineteenth century, voters recognized the new threat posed by concentrated corporate power and demanded a ban on monopoly. The antitrust laws that their legislators passed were unambiguous: Big is bad. For decades, these laws protected freedom and competition, but as Barry Lynn recounts in Liberty from All Masters, in the 1970s, a group of economists and their fellow travelers launched an intellectual coup worthy of Orwell. Legislating from the library, they persuaded judges that what the law said, actually, is that big is not bad. We live with the consequences. Monopolies give a handful of private citizens powers that autocrats of the past could only dream of. If you want to save democracy, read Lynn's guide to the battle citizens must wage, once again, to defend their liberties."
--Paul Romer, Nobel Prize winning economist Very few thinkers in recent years have done more to shift the debate in Washington than Barry Lynn. In Liberty From All Masters, he proves himself as a lyrical theorist and a bold interpreter of history. This book is an elegant summoning of a forgotten tradition that can help the nation usher in a new freedom.
--Franklin Foer, bestselling author of World Without Mind: The Existential Threat of Big Tech I've worked closely with Barry Lynn for many years, first in my role as founder of Authors United and later as President of the Authors Guild. I've long been an admirer of the clarity and elegance of his thinking and writing about globalization, monopoly, and economics. I believe Lynn is one of the most important intellectuals in America today, his work focusing on the fast-growing concentrations of economic power in our society, and the grave dangers that poses for innovation, competition, open markets, and the free flow of information so vital to our democracy.
--Douglas Preston, #1 New York Times bestselling author I read Barry's first book, End of the Line, back in 2005. What I thought at the time was, who is this guy, who is able to draw the connections between all these complex economic and political systems. In his next book, Cornered, he delivered a fully developed explanation for what's gone wrong with America's economy, in a common-sense language that anyone could understand. What Barry has done, in short, is reduce the neoliberal economic model to rubble, and he's done it in such a way as to make the demolishing of that grand fortress look easy. He even makes it seem like tearing it down is our patriotic duty, like it's part of the American tradition. Of course our modern ideas don't work, he has you agreeing--and any nineteenth-century farmer from Kentucky could have told us why.
--Thomas Frank, New York Times bestselling author of What's the Matter with Kansas? and Listen, Liberal Barry was one of the very first to warn of the dangers of the monopoly power of Google, Amazon and other online platforms. His analysis of the problem, and what to do about it, has been hugely helpful for all of us now fighting to protect our democracy from these corporations and their all-powerful manipulation machines. Barry knows what we are up against and frames it so anyone can understand. Fortunately, Barry also knows what needs to be done to fix the problem. That's why, in these dark days, Barry is one of the few people who give me hope.
--Roger McNamee, New York Times bestselling author of Zucked: Waking Up to the Facebook Catastrophe In a moment of deep economic calamity and suffering, Barry Lynn points to one of the most critical root drivers of our failing economy and democracy: the problem of monopoly power. Barry has been leading the way on reviving the public and policy attention to the problem of monopoly, and in this latest work he makes the crucial case for why contesting economic power is critical not just for addressing the problem of inequality, but also for advancing a vision for society that centers democracy, racial equity, and a more inclusive and dynamic conception of freedom. A must-read for everyone working to build a more inclusive democracy and economy in the years to come.
--K. Sabeel Rahman, President of Demos and Associate Professor of Law, Brooklyn Law School Over the last several years, Barry Lynn has been the key figure behind the sea change in how we view competition policy--or the lack thereof--in this country. He foresaw how the rise of unchecked corporate monopoly power would corrupt our economy, our politics and our society years before others, and he has relentlessly spoken that truth to power. Liberty From All Mastersis another visionary work, and confirms Lynn's status as one of the most important thinkers on the political economy today. A must read for anyone who cares about sustainable capitalism and liberal democracy.
--Rana Foroohar, author of Makers and Takers: The Rise of Finance and the Fall of American Business Admonitory, cautionary, and essential.
--Kirkus Reviews (starred review)

Praise for End of the Line: "Barry C. Lynn's The End of the Line is a sobering wake-up call, a brilliantly argued analysis of the limits of globalization. By officially pronouncing Fordism dead, Lynn allows the reader to understand how dependant U.S. companies have become on China and other manufacturing-based countries. Every American has a duty to read this book."
--Douglas Brinkley, Professor of History and Director of the Roosevelt Center at Tulane University "Barry Lynn puts the spotlight on the dangers of our over-outsourced economy. A catastrophe in a remote province of China can put a large part of the American electronics industry out of business. Our business leaders are so focused on the next quarter bottom line that they overlook the dangers of losing control of their supply lines. There are serious national security questions raised as well. Lynn has used his investigative skills to clearly and readably explain this danger to the general public."
--Arthur Hartman, former U.S. ambassador to the Soviet Union and France "The benefits, dangers, and sheer inevitability of global competition are the central forces shaping the economic and social future of the United States. Barry Lynn's book, based on careful reporting, is a real step forward because it dramatizes the stakes for Americans and clarifies the choices the country has to make."
--James Fallows, author of Breaking the News and national correspondent for The Atlantic "Striking in its clarity and originality... Merely for cleanly spelling out the fragility of our globalized production system and what needs to be done to avoid the possibility of catastrophic failure, this is one of the most important books on globalization in a decade.
--Michael Borrus, former director of the Berkeley Roundtable on the International Economy and executive in residence at Mohr Davidow Ventures "Tom Friedman for grown ups."
--The Washington Post "A great primer on the history of the corporate movement toward outsourcing, logistics and single sourcing... A strength of the book is Lynn's depth of research into the political, economic and cultural climates that led to our current business model."
--USA Today "A brilliant examination of the global economy and its danger zones. It's a book everyone concerned about our national and economic security should read."
--Milwaukee Journal-Sentinel
If the item details above aren’t accurate or complete, we want to know about it. Report incorrect product info.