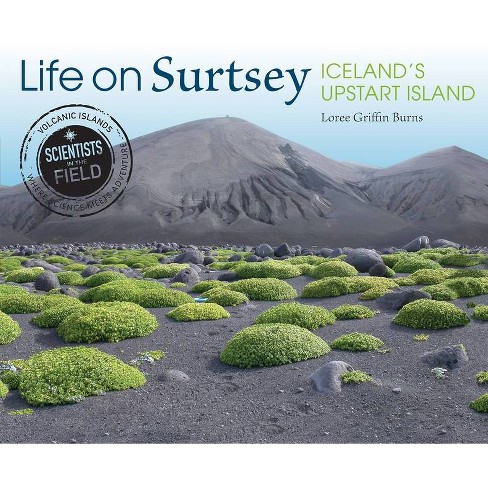 In this addition to the Scientists in the Field series, readers join scientists as they tackle something unusual in the world of ecosystems: colonization. Not a colonization by people, but one of cells, seeds, spores, and other life forms that blow in, fly in, float in, and struggle to survive on the beautiful but harsh new island of Surtsey.

On November 14, 1963, a volcano fifteen miles off the shore of Iceland exploded under the sea, resulting in a brand-new island. Scientists immediately recognized Surtsey for what it was: an opportunity to observe the way life takes hold. Loree Griffin Burns follows entomologist Erling Ólafsson on a five-day trip to Surtsey, where since 1970 he has studied the arrival and survival of insects and other species. Readers see how demanding conditions on Surtsey can be, what it's like to eat and work while making the smallest impact possible, and the passion driving these remarkable scientists in one of the world's most unique fields ever!

★ "An amazing science adventure well worth the trip." -- Kirkus, starred review ★ "Burns clearly conveys the long hours and spare conditions for such work... as well as the research team's unmitigated enthusiasm....Appendices offer insights into Iceland's culture and extreme climate, all of which enrich this unique demonstration of life's awe-inspiring tenacity." --Booklist, starred review ★"A plethora of curriculum connections make this a STEM title not to miss; budding scientists will return to this again and again."--School Library Journal, STARRED review "Burns, who traveled with Icelandic researchers to Surtsey, meticulously documents every detail of life in a remote field station, from the particulars of trapping insects to the extremes taken to minimize human impact on the island."--Horn Book

Loree Griffin Burns, Ph.D., did her doctoral at the University of Massachusetts Medical School. Ms. Burns lives in Massachusetts with her husband and children. She is the author of Beetle Busters, Tracking Trash, and The Hive Detectives.
If the item details above aren’t accurate or complete, we want to know about it. Report incorrect product info.