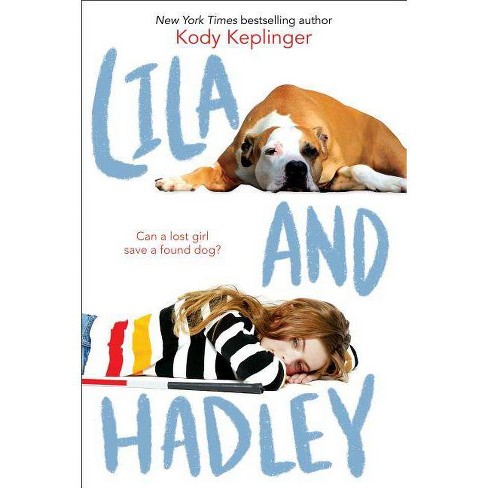 Hadley is an angry girl: angry at her mother for embezzling money, angry at her estranged older sister, Beth, whom she has to live with while her mother is in jail, angry at having to move to Kentucky away from her friends, and angry at the world because she has retinitis pigmentosa and is slowly going blind; but then she meets Lila, a rescued pit bull who has not responded to anyone else--so if Hadley can train Lila, maybe the dog can get adopted into her forever home, and just maybe Lila can help Hadley deal with her own problems.

Can a lost girl save a found dog? Find out in this unforgettable story about discovering true friendship, finding home, and the possibilities of forgiveness.

Hadley is angry about a lot of things: Her mom going to jail. Having to move to another state to live with her older sister, Beth, even though they haven't spoken in five years. Leaving her friends and her school behind. And going blind.

But then Hadley meets Lila.

Lila is an abandoned dog who spends her days just quietly lying around at the local dog rescue where Beth works. She doesn't listen to directions or play with the other dogs or show any interest in people. So when Lila comes and sits by Hadley (which is hardly anything, but it's more than she's done with others), Beth thinks maybe Hadley can help Lila. She tells Hadley they'll bring Lila home as a foster dog and Hadley can teach her to follow commands, walk on a leash, and be more of a people dog so she'll be ready to be adopted.

Only working with Lila is harder than Hadley thought, and so is the mobility training she starts taking to help with her failing vision. It feels like Lila is too stubborn to train and like learning to use a cane is impossible. But unless Hadley can help Lila, she'll never be adopted into a home. If Hadley could just let go of her anger, she might be able to save Lila... and herself.

Praise for New York Times bestselling author Kody KeplingerLila and HadleyA funny, moving tale, at once unsparingly realistic and upbeat. --Kirkus ReviewThe Swift Boys & MeA fine, honest and heartfelt coming-of-age tale. --Kirkus ReviewsKeplinger gives appropriate gravity to Nola's feelings of hurt and helplessness, while tempering her distress with reassuring outlets in her parents and two new friends. A believably bittersweet ending delivers an emotional understanding of the necessary changes we all undergo while growing up. --BooklistKeplinger's book is a heartfelt exploration of the nature of friendship, pain, and healing. --Children's LiteratureThat's Not What HappenedAn original and engrossing narrative about scars, recovery, and how the stories we tell can both sustain and hobble us. --Publishers WeeklyEchoing highly publicized tragedies, this taut, emotional story goes behind the headlines to reveal lives impacted by school violence. --Kirkus ReviewsA timely, thought-provoking read.... -- School Library JournalUnique... This is a must-read. --PASTE magazineRunBo and Agnes' unlikely friendship rings true and strong. --Kirkus ReviewsA good unlikely friendship story with compelling characters and a nuanced portrait of disability and small-town life. --School Library JournalThere's plenty to recommend . . . though the most effective thing here remains Agnes' and Bo's voices and the strength of their realistically tumultuous relationship. --BooklistThe DUFFA well-written, irreverent, and heartfelt debut. --Publishers WeeklyA complex, enemies-with-benefits relationship that the YA market has never seen before . . . Her snarky teen speak, true-to-life characterizations, and rollicking sense of humor never cease in her debut. --Kirkus ReviewsWhat's best here is Bianca's brazen voice. Even when confused, she is truer to herself than most. --BooklistLying Out Loud, a companion to The DUFFJust like the recipients of Sonny's fibs, readers will find themselves duped by her creativity, unabashed courage, and hilarious snark. Until it all blows up. Fierce, fresh, total fun. --Kirkus ReviewsReaders will cringe as Sonny digs herself deeper and deeper into trouble, then applaud when she learns how to develop trust in her relationships with parents, friends, and of course, a hot romantic interest. --VOYASonny is a realistic and very human character, and even though she is a liar, her motivations are all too believable. --School Library Journal

Kody Keplinger grew up in a small Kentucky town. During her senior year of high school, she wrote her debut novel, The DUFF, which is a New York Times bestseller, a USA Today bestseller, a YALSA Top Ten Quick Pick for Reluctant Readers, and a Romantic Times Top Pick. It has since been adapted into a major motion picture. Kody is also the author of Lying Out Loud, a companion to The DUFF; That's Not What Happened; Run; Shut Out; and A Midsummer's Nightmare, as well as the middle-grade novels Lila and Hadley and The Swift Boys & Me. Kody lives in New York City, where she teaches writing workshops and continues to write books for kids and teens. You can find more about her and her books at kodykeplinger.com.
If the item details above aren’t accurate or complete, we want to know about it. Report incorrect product info.