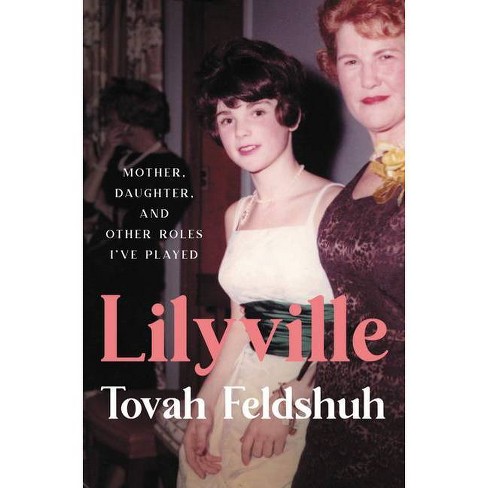 "A heartwarming and funny memoir from a beloved actress, Lilyville tells the story of a mother and daughter whose narrative reflects that of American women in the 20th and 21st centuries, and mirrors American cultural changes and the world's shifting expectations of women"--

This heartwarming and funny memoir from a beloved actress tells the story of a mother and daughter whose narrative reflects American cultural changes and the world's shifting expectations of women. From Golda to Ginsburg, Yentl to Mama Rose, Tallulah to the Queen of Mean, Tovah Feldshuh has always played powerful women who aren't afraid to sit at the table with the big boys and rule their world. But offstage, Tovah struggled to fulfill the one role she never auditioned for: Lily Feldshuh's only daughter. Growing up in Scarsdale, NY in the 1950s, Tovah--known then by her given name Terri Sue--lived a life of piano lessons, dance lessons, shopping trips, and white-gloved cultural trips into Manhattan. In awe of her mother's meticulous appearance and perfect manners, Tovah spent her childhood striving for Lily's approval, only to feel as though she always fell short. Lily's own dreams were beside the point; instead, she devoted herself to Tovah's father Sidney and her two children. Tovah watched Lily retreat into the roles of the perfect housewife and mother and swore to herself, I will never do this. When Tovah shot to stardom with the Broadway hit Yentl, winning five awards for her performance, she still did not garner her mother's approval. But, it was her success in another sphere that finally gained Lily's attention. After falling in love with a Harvard-educated lawyer and having children, Tovah found it was easier to understand her mother and the sacrifices she had made during the era of the women's movement, the sexual revolution, and the subsequent mandate for women to "have it all." Beloved as he had been by both women, Sidney's passing made room for the love that had failed to take root during his life. In her new independence, Lily became outspoken, witty, and profane. "Don't tell Daddy this," Lily whispered to Tovah, "but these are the best years of my life." She lived until 103. In this insightful, compelling, often hilarious and always illuminating memoir, Tovah shares the highs and lows of a remarkable career that has spanned five decades, and shares the lessons that she has learned, often the hard way, about how to live a life in the spotlight, strive for excellence, and still get along with your mother. Through their evolving relationship we see how expectations for women changed, with a daughter performing her heart out to gain her mother's approval and a mother becoming liberated from her confining roles of wife and mother to become her full self. A great gift for Mother's Day--or any day when women want a joyous and meaningful way to celebrate each other.

"If you're missing Broadway, Tovah Feldshuh's memoir will feel like a warm embrace."--BELLA Magazine

"The curtain goes up on Lilyville, and six-time Tony Award and Emmy Award nominee Tovah Feldshuh steps out as its funny, witty and memorable tour guide. Lilyville is a life, a state of mind and, as Feldshuh points out, a metaphor for grit and resilience....The book is an affecting, voice-driven chronicle of Feldshuh's evolving relationship with her strong, inimitable mother, Lillian Kaplan Feldshuh."--Jewish Boston

"Feldshuh has produced an honest, loving tribute to her tour de force mother....her book is interspersed with so many kernels of truth and maxims for living a fully expressed life....This heartfelt memoir captures the essence of love and intergenerational challenges, and as Tovah promised....it has a happy ending."--San Diego Jewish World

"Delightful."--"Thoughts from A Page" podcast

"Feldshuh's tribute to her mother will delight theatre and television fans, but will also resonate with those who understand the importance of a mother's role over a lifetime."--Buzz Magazines

"Delightful....A mother-daughter love story, a paean to Jewish identity, and a lamentation over the limited horizons for women of Lily's generation, Lilyville is presented as a theater piece in three acts, with 16 highly entertaining scenes and two droll intermissions....[An] unremittingly charming memoir."--Shelf Awareness

"The book eloquently contrasts the bold Feldshuh and the quiet Lily and delves into the circumstances that shaped these strong Jewish American women in two starkly different moments in history."--Dan's Papers

"A fascinating and wildly entertaining book."--BroadwayWorld.com

"A moving and at times laugh-out-loud funny story of mother and daughter."--Kveller

"A tender but unflinching look at a mother-daughter dynamic."--The Forward

"An intimate, entertaining memoir of her life and career.... Feldshuh's portrayal of Lily is striking; her thoughtful understanding of their dynamic and Lily's influence on her life and career, infused with her mother's candor, will delight readers. The heart of this book lies in the author's captivating writing--she is a dynamic storyteller with an actor's skill for articulating small moments that occur in everyday life. She captures growing up in New York, Jewish culture, and the entertainment industry with equal enthusiasm and detail.... A vivid, charming memoir and reflection on an expansive career and family."--Library Journal (starred review)

"Such an amazing book, I could not stop reading it....It's so heartwarming....You can't help but get completely immersed in this story...it's so incredible....The way she describes things in this story, you feel like you're there."--"The Undead Walking" podcast

"A revealing look at family, expectations, and forgiveness, and what it means to perform for audiences of thousands when the voice of one person is all that truly matters."--Town & Country

"[A] lively and engaging narrative...Feldshuh has a lot to say and does so with aplomb...In a look-back that is always intense, often hilarious, and sometimes fraught....Readers will feel lucky to encounter this delightful memoir."--Booklist

Tovah Feldshuh is an icon known for her starring roles as Israeli Prime Minister Golda Meir in Golda's Balcony (the longest-running one-person show in Broadway history), Irena Gut in Irena's Vow, and the title role in Yentl; her performances in Broadway productions like, Cyrano, Lend Me a Tenor, Pippin, and many others; and her television roles as Helena Slomova in the internationally acclaimed mini-series, Holocaust, as hypercritical mom Naomi in Rachel Bloom's smash hit Crazy Ex-Girlfriend and tough-as-nails head of Alexandria, Deanna Monroe on AMC's The Walking Dead.
If the item details above aren’t accurate or complete, we want to know about it. Report incorrect product info.