Little Do We Know - by Tamara Ireland Stone (Hardcover) 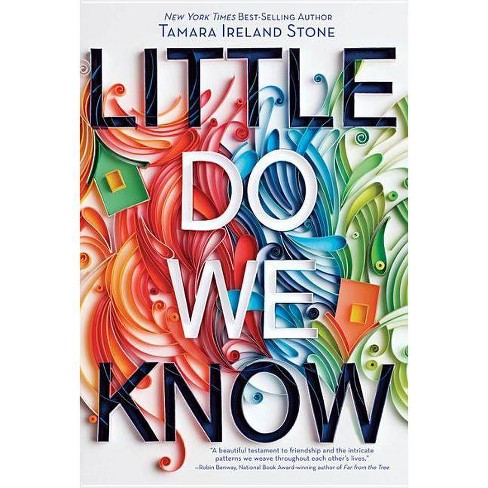 $14.98
undefined out of 5 stars with 0 reviews
be the first!be the first! ratings
Help us improve this page

Lifelong best friends and next-door neighbors Hannah and Emory have never gone a single day without talking. But now its senior year and they haven't spoken in three months. Not since the fight, where they each said things they couldn't take back. They're aching to break the silence, but those thirty-six steps between their bedroom windows feel more like thirty-six miles.
Then one fateful night, Emory's boyfriend, Luke, almost dies. And Hannah is the one who finds him and saves his life.
As Luke tries to make sense of his near-death experience, he secretly turns to Hannah, who becomes his biggest confidante. In Luke, Hannah finds someone she can finally talk to about all the questions she's grappling with. Emory just wants everything to go back to normal-the way it was before the accident. She has no idea why her relationship is spiraling out of control. But when the horrifying reason behind Hannah and Emory's argument ultimately comes to light, all three of them will be forced work together to protect the one with the biggest secret of all.
In the follow-up to her New York Times bestseller, Every Last Word, Tamara Ireland Stone crafts a deeply moving, unforgettable story about love, betrayal, and the power of friendship.
If the item details above aren’t accurate or complete, we want to know about it. Report incorrect product info.