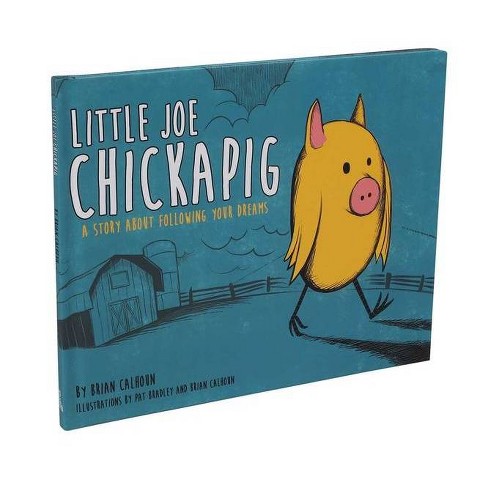 "Little Joe Chickapig wants to be just like his adventurous grandpa. But how did the old chickapig hero do it? Find out in this fun, original story"--Author's website.

Is it a book about aspirations or the backstory for the board game? Chickapig is defined as "an animal hybrid that is half-chicken and half-pig" and is depicted in yellow, two-legged chick shape with pink pig snout and ears. Young Joe Chickapig lives on a farm that was his grandfather's dream, but it's getting Joe down. He dreams of adventure but needs the "courage to follow his heart. / But how could he do it? How could he start?" In a bedtime story, Joe's mother shares the influential characters that helped Joe's sailor grandfather "follow his heart against the tide." It seems that "Grandpa had heard a story told / Of a great big bear who broke the mold. / The bear was tired of striking fear"--so he became a forest doctor and a friend to all. And the bear's inspiration? "A mouse who went to space." The mouse, in turn, found hope in a "fierce young dragon" who joined a rock band. And coming full circle, the dragon found courage from a Chickapig warrior who "tired of shields and swords to wield" and established a farm. Chickapig game fans will appreciate this fanciful rhyming tale illustrated in attention-grabbing colors, but readers coming to it cold will note a distinct absence of plot. Mouse and dragon present female; all others are male. Take strength from the dreamers before you and follow your dreams. Or maybe just roll the dice. (Picture book. 4-6)-- "Kirkus Reviews"

A luthier and game-creator-turned-author, Brian Calhoun grew up in the countryside of Rockbridge County, Virginia. Calhoun relocated to Charlottesville in his early twenties and launched Rockbridge Guitar, an artisan business crafting high-end acoustic guitars for musicians, including Dave Matthews, Jason Mraz, Brandi Carlile, Warren Haynes, and more. After playing a board game he deemed boring, Calhoun came up with the idea for the Chickapig game in 2013. Calhoun had always thought of writing children's books, and the characters from the game seeded the idea for his first book, Little Joe Chickapig. Calhoun is currently developing a new game, 25 Outlaws, with his Chickapig partner, Dave Matthews. Animator and illustrator Pat Bradley was born in Baldwinsville, New York, where he discovered his love of drawing at an early age. He studied at the Maryland Institute College of Art and began his career at the Field Museum of Chicago. His educational animations have won national industry awards for their creativity, humor, and ability to make complex subjects understandable.Pat established his own company, Springshoe Animation, in 2010. Located in Charlottesville, Virginia, he partners with museums, advertising agencies, authors, and anyone else in need of visual storytelling expertise.
If the item details above aren’t accurate or complete, we want to know about it. Report incorrect product info.