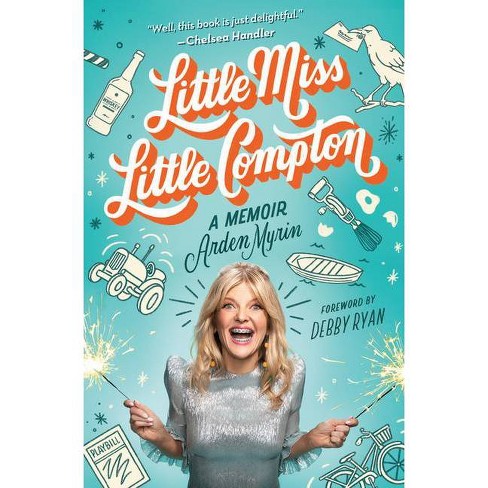 Comedian and actress Arden Myrin delivers a hilarious and heartfelt memoir about navigating adulthood and her rise on the comedy scene despite an unconventional upbringing. Arden Myrin is the product of not one, but two hasty decisions. Her paternal grandparents ran off and got married twenty-four hours after they met. Arden's parents did one better -- they married on a dare. Growing up in Arden's family, her dad ate nothing but sheet cake, while her mom was busy teaching a Cub Scout troop how to put on a Broadway musical. Oh, and she grew up in a small farm town called Little Compton, Rhode Island. Human population: 3,518. Cow population: 278. General Store: One. Stop Lights: Zero. At nineteen, Arden packed her bags with stars in her eyes and landed at ImprovOlympic in Chicago, where for the first time in her life she felt like she finally made sense. After drinking in as much comedy experience (and Sea Breezes) as she could, Arden got her big break when she was cast on an NBC sitcom. She moved to Los Angeles, knowing no one, and quickly realized she had no clue how to be a fully-grown human adult on her own. How do you date someone and not ruin it? How do you interact with people if you have a teeny bit of social anxiety? How do you stand up for yourself if you're a people pleaser? And most of all, how do you start to believe that you are enough? From small town Rhode Island to accidentally kicking Courteney Cox in the face on a soundstage in Hollywood, Arden's hilarious, inspiring, and honest story shows readers how one totally unconventional upbringing might be the very thing one needs to thrive, all while showing up as your most outrageous, authentic self. Shout out to Little Compton!! Woot Woot!!!

After reading this book, I realize the best tools for Arden Myrin's family are an axe and a chainsaw.--Kevin Nealon (Saturday Night Live, Weeds)

Arden and her book are brilliantly funny head to toe. And joyful. She's twisted and edgy and fearless, but her exuberance is what makes Little Miss Little Compton so special.--Michael Showalter (Writer/Director of Wet Hot American Summer, Director of The Big Sick)

Arden Myrin is a sly, clever wit fueled by sweetness, irreverence, and charm. Few people make me laugh like she does.--Bobcat Goldthwait, comedian, author, and director

Arden Myrin is one of the funniest people I know. Insightful and hilarious; if I knew how to read, I would read this book. --Dana Gould (The Simpsons)

Arden Myrin is such an incredibly talented writer, with a fresh, original, and hilariously funny voice that I don't quite think I've ever heard replicated anywhere else. Her energy is infectious, whether you are reading her work or seeing her perform. There is something almost intoxicatingly fun about her. She is really just a breath of fresh nitrous.--Sarah Benincasa, award-winning comedian and author

Arden Myrin, whether on screen or on paper, is comedic energy personified. Her prose makes one wish they could view the world through her lens, which is somehow effervescent, piercing, and forgiving all at once.--Stephen Falk (You're the Worst, Orange Is the New Black, Weeds)

Arden's work is delightfully odd and charming, just like her. She's managed to capture a hilarious and well-written snapshot of her off-kilter family in Little Miss Little Compton.--Kate Flannery (The Office)

Get ready to be tickled by Arden Myrin. Her book is so much fun!!--Rebecca Romijn (X-Men, Star Trek Discovery)

Hooray for Arden!!!! Arden Myrin is truly one of a kind. Her original, honest voice and hilarious stories make me feel like I'm having coffee with an old friend. Arden's big heart and humor explode across the pages of this super funny book!--Molly Shannon

I do not use this word lightly when describing somebody. In fact, it is a word I use so infrequently that I don't think I have ever used it before. So, when I say Arden Myrin is a 'wack-a-doodle' you know I mean business. Arden's book is funny in an off-kilter, head-cocking way. It is the kind of funny that makes you laugh, then think about why you are laughing, then laugh even harder as your reward for having figured out that what she has said is even funnier below the surface than it is above. She is either cheerfully malevolent or malevolently cheerful; I cannot figure out which. Perhaps it is both. That would make sense, since keeping people on their toes while making them laugh and fall in love a little bit are all qualities that make the wack-a-doodle so deadly.-----Michael Ian Black (Author of You're Not Doing it Right: Tales of Marriage, Sex, Death, and Other Humiliations)

I had the pleasure of working with the lovely Arden Myrin for many years on Chelsea Lately and very few people exude her kind of genuine joy. You can't help but smile when she's around. I've also been lucky enough to hear firsthand accounts of Arden's colorful upbringing and I can't believe she's not batshit crazy. Well, maybe she is but she hides it well! Her book is hilarious, unique, and full of life. Anybody who gets the chance to read Little Miss Little Compton is in for a real treat and will no doubt leave wanting more!--Fortune Feimster (The Mindy Project, Netflix special Sweet N Salty)

I know some people think comedy only comes from tragedy, but the only thing tragic in this case would be if Arden didn't share her story with us. Amazingly funny and original, just like Arden.--Sarah Colonna, comedian and New York Times bestselling author

I like to say, just do you and be you. Arden is not afraid to let her freak fly, and girl, does she let it ALL out in this book. Now it all makes sense. Everyone should read Little Miss Little Compton!--Loni Love (The Real)

I loved this wickedly funny, huge hearted book! Arden made me laugh out loud page after page, with her honest, vulnerable, hilarious tribute to an unusual upbringing and her fabulous mom. It's sizzling on the outside and tender on the inside -- just how I like my steak. I'm going to give this book to all my girlfriends!--Kate Walsh (Grey's Anatomy, Private Practice, 13 Reasons Why, The Umbrella Academy)

Lucille Ball meets David Sedaris and travels to Little Compton, Rhode Island. Arden Myrin laughs at herself first and makes you want to do the same! You won't find a prettier, smarter, wittier CLOWN ever. JUMP in and read about the circus Arden Myrin grew up with. FUNNY, FUNNY, and even FUNNIER!--Connie Shulman (Orange Is the New Black, Doug)

The inimitable Arden Myrin is a deeply gifted comedian and writer. This revealing and hilarious memoir shows us how she finds humor and heart in all of life's highs and lows. Arden sees the world through rainbow-colored lenses; I keep trying to borrow them from her, but she claims they're permanently attached.--Lauren Lapkus (Orange Is the New Black, Between Two Ferns, The Wrong Missy)

There is no one more talented than Arden -- her writing cuts me right to my core and makes me laugh the very next second.--Amy Schumer

You have no idea how hard Arden Myrin can make you laugh. Mainly due to the fact that you start laughing so hard that you black out. She's cracked me up onstage, backstage, at a haunted hayride, and now with this insanely funny book. Basically, Arden Myrin knows how to make anything funny.--Jonah Ray (Mystery Science Theater 3000, The Meltdown with Jonah and Kumail)

Arden Myrin is an actress, writer, nationally headlining standup comedian, and the host of the popular iHeartRadio Bachelor podcast Will You Accept This Rose? She can currently be seen on the smash hit Insatiable as Regina Sinclair (named one of the top 10 most binged shows on Netflix) and has appeared on Chelsea Lately, Mad TV, Shameless, Inside Amy Schumer, Orange Is the New Black, The Howard Stern Show, Grey's Anatomy, Key & Peele, and RuPaul's Drag Race, among others. Arden is from Little Compton, Rhode Island, and currently lives in Los Angeles with her husband Dan and their kitties.
If the item details above aren’t accurate or complete, we want to know about it. Report incorrect product info.