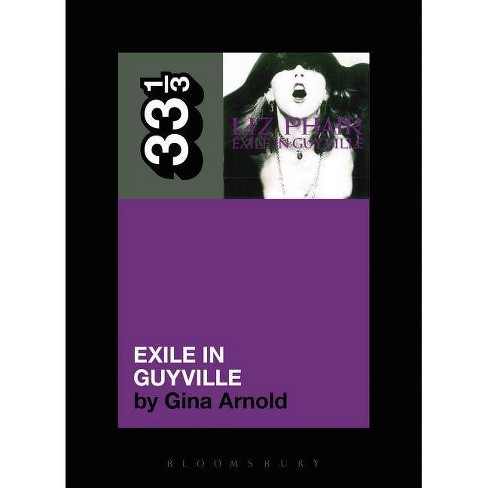 $10.89
0 out of 5 stars with 0 reviews
be the first!be the first! ratings
Shipping
Free standard shipping with RedCard
Help us improve this page

"Writing at length about two themes - 'third-wave feminism' and the changing nature of indie music over the past twenty years - requires laborious research, cogent arguments, and logical grounding from start to finish. Doing so in the context of one record makes the task even more difficult. I can say, having reviewed many scholarly articles in my time, that Arnold passes the test with flying colors. The book is well cited, filled (but not overwrought) with pertinent facts, and her points are structured in a way that just make sense. In a word, the book is smart." --2bit Monkey

"Gina Arnold's book on Liz Phair's 1993 double LP, Exile in Guyville, is the kind of book that weighs in, pulls no punches, and shines a light on the entire enterprise of popular music." --Paul Gleason, Caught in the Carousel "I found this book to be, like Ms. Phair's album, charming and brave and unexpectedly moving. The author is excellent on so many things, including how the power of Ms. Phair's songs grows from their grainy details, quotidian observations that other rockers so rarely give us, about things like housework and roommates and 'what is was like to feel voiceless and powerless in a nightclub, on a road trip, or during sexual intercourse.'" --Dwight Garner, The New York Times "Arnold is a wonderful writer: fearless, precise, full of doubt, never taking anything for granted. She's one of the few people left on the planet who uses presently correctly, which can create its own thrill. Going back to Liz Phair's once notorious, now often forgotten, absurdly in-your-face ambitious first album--a story about a girl and a time and a place, the indie-rock world of Wicker Park, in Chicago, in the early 1990s, but in Phair's hands a story told with such heart that you need no such details to catch every shade of meaning and emotion--Arnold has written a book about the past (when dinosaurs, as personified by Dinosaur Jr., ruled the earth), its follies and crimes (Every past is worth condemning, Arnold quotes Nietzsche, and then puts the words to work), and the idea of an imagined community that the past leaves behind (Often I think I am a better informed citizen of Middlemarch, Bartsetshire, Arnold says, than I am of San Francisco). And it's about what it means for a young woman to simultaneously take on both everyone in her town and take down the album that sums up everything that everyone in her town would like to sound like, look like, act like, be--to take down a whole way of being in the world. At one point we had felt like misfits or we had felt like 'others, ' Carrie Brownstein recently said of the time she shared with Phair--in her case, in her own indie-rock community, in Olympia, Washington. It was supposed to be come one, come all, you know? Freaks gather round and we'll provide you with shelter. And you get in these scenes and you realize, no, I've gone from one set of rules and regulations and codifications of how you should dress and what you should know to another... What should have been inclusive felt very exclusive... there were times when I felt very flummoxed by the rules, very alienated, and I was trying way too hard to figure out not just what band to like, but am I liking the right album from that band. And then, am I liking the right band member in that band? Am I liking the right song on the right record? Have I picked the right year to stop liking the band?" --Greil Marcus, The Believer "Provocative in all the right places, persuasively argued and certainly among the most professional of the series. It reminds me how much my thinking about gender and sexuality has benefitted from reading women's testimonials to the emotional power of Guyville. It also reminds me how, to this day, I would drink Liz Phair's bathwater" --Kirk Curnutt, Paste Magazine "The series is probably the most remarkable regular event in rock journalism today. Each thin volume - there are nearly 100 of them now, enough almost to stretch across the back seat of a Mini Cooper - presents one critic on one album. A lot of these writers are capable of shredding." --The New York Times
If the item details above aren’t accurate or complete, we want to know about it. Report incorrect product info.