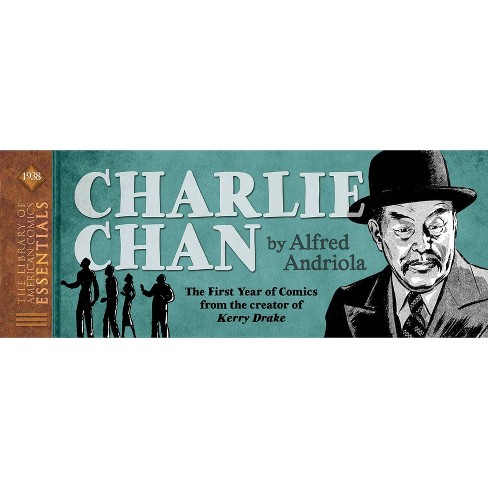 $21.49
MSRP$29.99
no reviews yet
be the first!be the first! ratings
Shipping
Free standard shipping with RedCard
Loading, please wait...
Help us improve this page

A key early work from the creator of the long-running detective series Kerry Drake presented in a format that is as close as one can get to experiencing it as a daily comic. As a famed hero of the mystery novels by Earl Derr Biggers, Inspector Charlie Chan reached even greater heights in a series of popular movies. As actor Sidney Toler was preparing to replace Warner Oland as the wily police detective in 1938, Alfred Andriola was tapped to create a newspaper strip version of the character. Andriola was secretary to Milton (Terry and the Pirates) Caniff and Chan would be his first cartooning effort, but with some friends in Caniff's orbit, Andriola succeeded in producing what The World Encyclopedia of Comics says is "among the best comic strips in the 'Caniff school.'" The pride of the Honolulu Police Department uses his intellect more than his fists to solve cases of international intrigue, and the syndicate's initial promotion called Charlie Chan "A new mystery strip, totally devoid of guns and gangsters" to separate it from Dick Tracy and his many hard-boiled imitators. Not that the strip is devoid of action and romance--Chan's tall, handsome assistant, Kirk Barrow, shoulders those "difficult" burdens with aplomb. Featuring the first complete year of daily strips, from October 1938 to November 1939, this volume of LOAC Essentials offers readers exciting adventures, snappy dialogue, and arresting art, making it a fascinating complement to Caniff's own efforts on Terry and the Pirates during this period.
If the item details above aren’t accurate or complete, we want to know about it. Report incorrect product info.