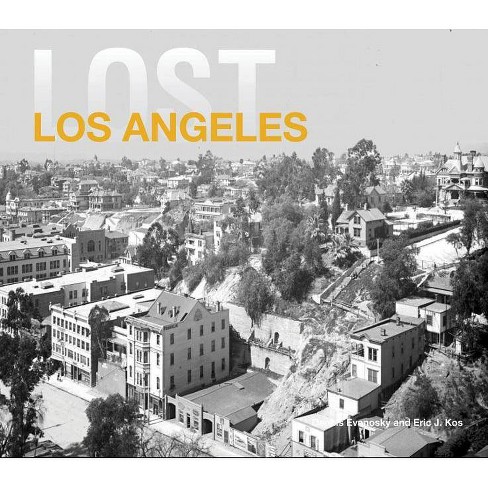 Los Angeles is less than 150 years old yet in that short time a great deal has been built and torn down. And while most cities suffer the loss of classic old cinemas, Victorian hotels and grand railroad stations, Los Angeles has lost those and much more. It has seen the passing of major industries, film companies, film lots, hills, airfields, piers and a speedway. In Los Angeles, citrus groves have come and gone, oil derricks have sprung up in their place and been replaced by housing tracts. The movie industry moved in from New York and Chicago, expanded, contracted and then sold off their lots. National radio stations chose the area around Sunset & Vine to build grand art deco studios which were soon vacated. Abbot Kinney's vision of a Venetian suburb was largely filled in after the banks eroded.There is an extraordinary variety of losses from this unique city: the Ambassador Hotel, Barker Brothers, Beverly Hills Speedway, Chaplin Airfield, the community in Chavez Ravine, The City of Los Angeles train, Church of the Open Door, Fort Moore Hill, the MGM backlots, La Grande Station, Pan Pacific Stadium, Casa Don Vincente Lugo, County Records Building, the Egyptian marquee, Helms and Van de Kamp bakeries, Wrigley Field, Sears, Jayne Mansfield's Pink Palace, the Temple Block and the Zanja Madre.

Dennis Evanosky and Eric J. Kos publish the Alameda Sun, a weekly newspaper across the bay from San Francisco. Dennis has written three books about Bay Area history. Eric graduated from the Rhode Island School of Design in 1977. He has written for and designed various publications before forming Stellar Media Group Inc. in 2001. Dennis and Eric first teamed up in 2004 to write East Bay Then and Now and in 2010 Los Angeles from the Air Then and Now. They are also the authors of Lost San Francisco.
If the item details above aren’t accurate or complete, we want to know about it. Report incorrect product info.