Louie, Take a Look at This! - by Luis Fuerte (Hardcover) 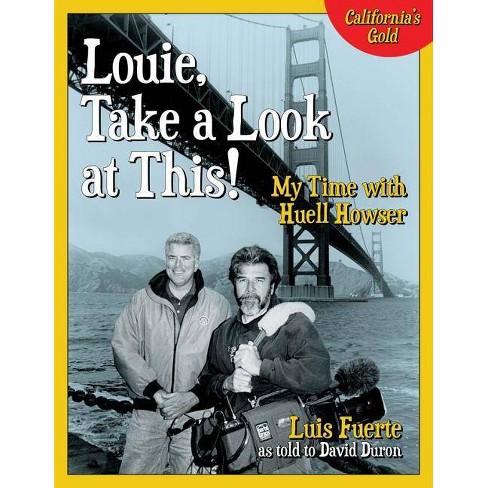 "Huell Howser was a national treasure. For years, Louie captured his spirit on camera, and with his insightful new book, Louie has managed to reveal even more about our favorite California tour guide. In short: It's amaaaazing."
-- Adam Carolla, host of The Adam Carolla Show "We fans want a breezy, informative, intimate book about Huell, and Luis Fuerte delivers with Louie, Take a Look at This!"
-- John Rabe, Off-Ramp, KPCC/NPR "Fuerte's narrative is measured, almost diplomatic at times, protective of both his late friend's legacy and his own, giving proper due to Howser's perfectionism, his good-heartedness and his eccentricities.... Fuerte comes off just as generous of spirit as his friend, and you can sense his indulgent amusement when he writes about some of Howser's zany quirks."
--L.A. Weekly "This fascinating book shows the difficulties of filming California's Gold, with Luis carrying a 24-pound metal and glass camera atop dangerous sheer canyon trails, in the front seat of Santa Cruz Boardwalk's famed Giant Dipper wooden rollercoaster, amongst inmates in Folsom Prison, rafting on the Kern River and atop the Golden Gate Bridge in San Francisco.... I couldn't put the book down and read it through in one reading. You'll love it, too!"
--See California "It's as if Huell said, 'Hey Luis, get ready for your close up!' This book is just that! A close-up and behind-the-scenes look at the adventures of the guys who brought you one of California's most popular shows about itself."
-- Harry Pallenberg, longtime producer for Huell Howser "This book is an insightful, funny, and entertaining read with a true insiders' view of filming with Huell Howser around the Golden State. Huell was a one of a kind storyteller, and this book is a great way to learn about Louie and Huell's adventures over the years. I highly recommend the book, and guarantee it is well-worth reading!"
-- Scott Gediman, Park Ranger and Chief of Public Affairs at Yosemite National Park, and a seasoned regular on various KCET programs (including California's Gold)
If the item details above aren’t accurate or complete, we want to know about it. Report incorrect product info.