Love on the Brain - by Ali Hazelwood (Paperback) 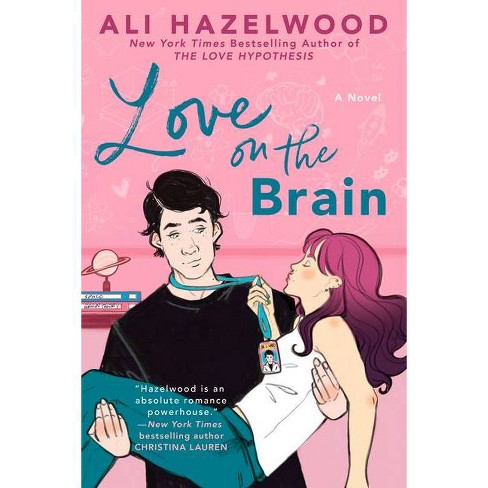 From the New York Times bestselling author of The Love Hypothesis comes a new STEMinist rom-com in which a scientist is forced to work on a project with her nemesis--with explosive results. Like an avenging, purple-haired Jedi bringing balance to the mansplained universe, Bee Königswasser lives by a simple code: What would Marie Curie do? If NASA offered her the lead on a neuroengineering project--a literal dream come true after years scraping by on the crumbs of academia--Marie would accept without hesitation. Duh. But the mother of modern physics never had to co-lead with Levi Ward. Sure, Levi is attractive in a tall, dark, and piercing-eyes kind of way. And sure, he caught her in his powerfully corded arms like a romance novel hero when she accidentally damseled in distress on her first day in the lab. But Levi made his feelings toward Bee very clear in grad school--archenemies work best employed in their own galaxies far, far away. Now, her equipment is missing, the staff is ignoring her, and Bee finds her floundering career in somewhat of a pickle. Perhaps it's her occipital cortex playing tricks on her, but Bee could swear she can see Levi softening into an ally, backing her plays, seconding her ideas...devouring her with those eyes. And the possibilities have all her neurons firing. But when it comes time to actually make a move and put her heart on the line, there's only one question that matters: What will Bee Königswasser do?

"With her sophomore novel, Ali Hazelwood proves that she is the perfect writer to show that science is sexy as hell, and that love can 'STEM' from the most unlikely places. She's my newest must-buy author."--Jodi Picoult, #1 New York Times bestselling author of Wish You Were Here "I cannot get enough of her brand of brainy romance!...Writing with an emotionally brilliant and witty pen, Hazelwood is an absolute romance powerhouse."--Christina Lauren, New York Times bestselling authors of The Unhoneymooners

Ali Hazelwood is the New York Times bestselling author of The Love Hypothesis, as well as a writer of peer-reviewed articles about brain science, in which no one makes out and the ever after is not always happy. Originally from Italy, she lived in Germany and Japan before moving to the U.S. to pursue a Ph.D. in neuroscience. She recently became a professor, which absolutely terrifies her. When Ali is not at work, she can be found running, eating cake pops, or watching sci-fi movies with her two feline overlords (and her slightly-less-feline husband).
If the item details above aren’t accurate or complete, we want to know about it.

Before I Do - by Sophie Cousens (Paperback)

Every Summer After - by Carley Fortune (Paperback)

5 out of 5 stars
Would recommend
Disney0608 - 1 month ago
Cute plot. Enjoyed kt
Did you find this review helpful?

1 out of 5 stars
Would not recommend
Jay - 2 months ago
Bee is the most annoying character. She trying to be funny she isn’t the story line is horrible it’s really boring I wouldn’t waste my money on this book.
1 guest found this review helpful. Did you?

5 out of 5 stars
Would recommend
Bella - 3 months ago, Verified purchaser
Easy read. The plot didn’t have many big twists or turns and was pretty predictable but it was an easy digestible romance read and I thoroughly enjoyed it.
Did you find this review helpful?

5 out of 5 stars
Would recommend
Dijana - 4 months ago, Verified purchaser
So good! Love love love
1 guest found this review helpful. Did you?

4 stars for another quirky stem romcom

4 out of 5 stars
Would recommend
HabbinJabbins - 5 months ago, Verified purchaser
I didn't love this one nearly as much as her first book, The Love Hypothesis, but it was still a cute and enjoyable read. The end was a bit dramatic (and somehow also predictable?) for me, though.
Did you find this review helpful?

5 out of 5 stars
Would recommend
akittenishdiary - 5 months ago
Loved this story, easy read and predictable but cute and romantic.
Did you find this review helpful?

1 out of 5 stars
Would not recommend
Blunt reviews - 5 months ago
Love hypothesis was fantastic. I was bored and was not impressed with how much political agenda was in this book. Not to mention the “plot twist” I could see from 100 miles away.
6 guests found this review helpful. Did you?

Love Can't Be On The Brain, When This Book Has Non

1 out of 5 stars
Would not recommend
Literary Sassy Lassy - 5 months ago, Verified purchaser
Can I give is 0 stars? Love Hypothesis is the ONLY reason this book has any sort of HYPE. This book and characters are terrible. Its like the book has an agenda made by the author… MC is absolutely unlikable, feminist liberal with a nasty attitude and woe is me personality. Which absolutely insults and overshadows actual women in the real world, whose profession hold much respect for their intelligence in the fields this MC is. THIS BOOK IS GARBAGE. Just skip it. This author may be a ONE HIT WONDER. Like many Pandemic writers. Fingers crossed we get another enjoyable book like Love Hypothesis. I ended up returning this, couldn’t even finish a few chapters in.
9 guests found this review helpful. Did you?

5 out of 5 stars
Would recommend
maddog - 5 months ago, Verified purchaser
Ali Hazelwood never disappoints with her story writing skills.
1 guest found this review helpful. Did you?

It's good but not the best

4 out of 5 stars
Would recommend
Mimi - 5 months ago, Verified purchaser
I did like it. It doesn’t compare to the love hypothesis but I did enjoy it. Definitely a lot spicier in the love scenes. Is it my ultimate favorite? No but it was a good read.
Did you find this review helpful?

4 out of 5 stars
Would recommend
Honey_beee - 5 months ago
As always the author did not missed
2 guests found this review helpful. Did you?

Better than her debut novel

4 out of 5 stars
Would recommend
Rhi - 5 months ago
3/5 Steam Rating 1st Person POV, Women in STEM, Sapphic side plot Enemies-to-Lovers, Workplace Romance I have to be really honest, I didn’t care for The Love Hypothesis. I went into this book as my last chance for this author, and I ended up enjoying it! I also want to note that this book has more steamy than her previous book, so know that going in. I adored how quirky & fun Bee was as a character. She was a breath of fresh air. I also enjoyed how steadfast and understanding Levi was, even though he was a bit awkward at times. There were a lot of Marie Curie references within this book, but I actually enjoyed them. I thought the author did a good job of weaving the references into the story in a way that was informative, without being annoying. I know this might not be for everyone, but I enjoyed it. I also LOVED Rocío and her sub-plot. Talk about an interesting and unexpected character! I would love to see her get her own book one day! There were a few things that didn’t work for me. First, the use of the ™️ and the “titles” associated with it was excessive and felt a bit childish. I also thought that there were a few cliché romance themes that this story could have done without, like the tiny woman always needing help from the giant man. I also wasn’t a fan of how Bee took everything with Levi to the extreme; no one would interpret “change your dress” to “I think you’re ugly and hate everything about you” but Bee seemed to. Overall, I thought that this was a fun quirky read. If you’re like me and didn’t love this authors debut novel, maybe give this one a try. * Thank you NetGalley for the gifted copy. This opinion is my own. *
4 guests found this review helpful. Did you?