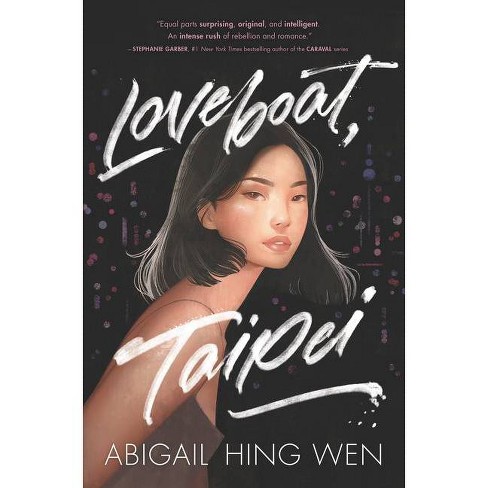 When Ever Wong's parents sent her away fro the summer, she's expecting Chien Tan: a strict, educational immersion program in Taiwan. Instead, she finds the infamous "Loveboat." There, Ever is surrounded by prodigies, like Rick Woo, Chinese American wonder boy and longtime bane of her existence; Ever's roommate, the confident and clever Sophia Ha, as glamorous as she is sharp; and the intimidatingly cool Xavier Yeh, heir to an international tech empire. But her classmates are more interested in the nonstop Taipei nightlife than anything to do with the curriculum. Hookups abound, snake-blood sake flows, and adult supervision is nonexistent. For the first time ever, Ever is discovering what freedom tastes like and it's exhilerating. But summer will end and Ever will be back to her parents and the future they've planned for her. Will she let this glimpse of freedom go - or will Loveboat give her the courage to pursue fhe future she dreams of, and the Ever Wong she wants to be?

Optioned for film by the producers of Jenny Han's TO ALL THE BOYS I'VE LOVED BEFORE.

Praised as "an intense rush of rebellion and romance" by #1 New York Times bestselling author Stephanie Garber, this romantic and layered Own Voices debut from Abigail Hing Wen is "a roller-coaster ride of romance and self-discovery." (Kirkus)

And just like that, Ever Wong's summer takes an unexpected turn. Gone is Chien Tan, the strict educational program in Taiwan that Ever was expecting. In its place, she finds Loveboat: a summer-long free-for-all where hookups abound, adults turn a blind eye, snake-blood sake flows abundantly, and the nightlife runs nonstop.

But not every student is quite what they seem:

Ever is working toward becoming a doctor but nurses a secret passion for dance.

Rick Woo is the Yale-bound child prodigy bane of Ever's existence whose perfection hides a secret.

Boy-crazy, fashion-obsessed Sophie Ha turns out to have more to her than meets the eye.

When these students' lives collide, it's guaranteed to be a summer Ever will never forget.

"A unique story from an exciting and authentic new voice." --Sabaa Tahir, #1 New York Times bestselling author of An Ember in the Ashes

"Fresh as a first kiss." --Stacey Lee, award-winning author of Outrun the Moon

"An entertaining and heartfelt debut that takes readers on a roller-coaster ride of romance and self-discovery." --Kirkus Reviews "There's a sweetness to Ever's rumspringa, and the hothouse atmosphere of Chien Tan, with its intense relationships and clever balance between respectability for parents and opportunistic freedom for their offspring, is deftly conveyed." --Bulletin of the Center for Children's Books "Ever's summer [turns] into one of love, mischief, and self-awakening that she will soon not forget... [but] It's Ever's resulting growth in the face of parental expectations and heartache that will resonate most with readers far and wide."--Booklist "From tea eggs to snake blood sake, the energy of Taipei in the summer provides a winning backdrop to this joyful debut about a young American dancer who finds love and freedom by exploring her Taiwanese roots."--Publishers Weekly "Refreshing and exciting...YA readers will love the mix of romance, defiance, adventure, culture, and friendship."--School Library Journal "Equal parts surprising, original, and intelligent, Loveboat, Taipei is an intense rush of rebellion, romance, and complex family dynamics. If you've ever wanted to feel as if you're breaking all the rules without actually breaking any rules then this is the book you need to read."--Stephanie Garber, #1 New York Times bestselling author of CARAVAL "[Loveboat, Taipei] is a wonderful read and I find the book has just stayed with me. It has so much to say about being the child of immigrants, about gender and sexuality, about identity and what makes a home. Ever's search to define herself, with all her intersecting identities, in a world that wants to define her is really beautifully wrought and lovely."--Anne Ursu, author of the National Book Award long listed novel The Lost Boy "Loveboat is a Crazy Rich Asians meets a Jane Austen comedy of manners--fresh, fun, heartfelt and totally addictive, a story about finding your place--and your people--where you least expected."--Kelly Loy Gilbert, Morris Award Finalist author of Conviction "Abigail Hing Wen's LOVEBOAT, TAIPEI is a poignant and honest examination of first love, family obligations and that strange place between high school and college, where we don't quite know who we are and as such, anything could happen. A unique story from an exciting and authentic new voice."--Sabaa Tahir, #1 New York Times bestselling author of AN EMBER IN THE ASHES "Not a ship, but a cultural phenomenon, get ready to board the Love Boat, where millions of Chinese Americans get their first taste of love and freedom. Abigail Hing Wen's debut is fresh as a first kiss."--Stacey Lee, award winning author of OUTRUN THE MOON
New York Times Best Seller
Book that has been on the New York Times Best Sellers list
If the item details above aren’t accurate or complete, we want to know about it. Report incorrect product info.