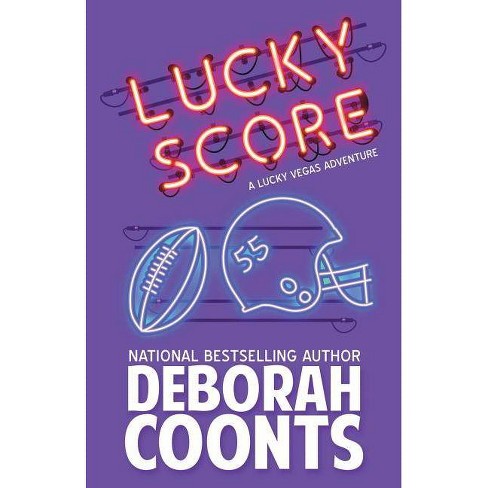 So, when the NFL announces it's moving a team to Vegas, Lucky is left on the fence until the trouble she feared lands in her lap.

Nolan Ponder, one of the key players in the negotiations to get the NFL to Sin City, staggers into the Babylon covered in blood and holding a knife.

With the mountains of money and careers on the line, Lucky figured someone would try to kill the deal.

Chasing down a murderer is the last thing she needs.

Teddie, her former live-in lover, is exploiting every angle to get back into her heart.

Jean-Charles, her fiancï¿½, is planning a trip to France to introduce Lucky to his family.

Lucky's life is quickly becoming a game of murder and mayhem.

She just hopes this game won't go into overtime.

A light, funny, romantic mystery providing a Vegas escape appropriate for anyone looking for a good laugh. Get your copy today!

AN INTERVIEW WITH DEBORAH COONTS

Why did you decide to write humor?

I'm not sure I decided to add snark to the Lucky books, specifically to Lucky's own voice, it just happened that way. When I was a kid, my mouth always got me into trouble. Finally, I've found a way to harness the sarcasm for the Forces of Good--or at least in a way not to anger my grandmother. And when Lucky started talking to me, she had a strong dose of sass in her.

The Lucky O'Toole Vegas Adventure series is hard to categorize. Is that by design?

When I set out to write Wanna Get Lucky?, I knew I wanted to write a romp through Las Vegas. I had the characters and the setting but no real understanding of narrative drive. So, I threw a young woman out of a tour helicopter into the middle of the Pirate Show and let the story unfold. A bit of murder to keep the plot moving, some wisecracking and Vegas mischief to make you laugh, and some romance to keep it interesting. A bit of a mash up, but it works.

"Get ready to win big--with a novel that will keep you glued to the pages all the way to the end." - Brenda Novak, New York Times & USA Today bestselling author

"More fun than a winning streak in Vegas. Lucky O'Toole is a character with brains, beauty, and a wry sense of humor. Readers will want to meet her again--and soon." - Diane Mott Davidson, New York Times bestselling author

"Deborah Coonts...entrusts the sleuthing to a brainy beauty who sees the lighter side of human folly." - New York Times Book Review

"Las Vegas is the perfect setting for this witty tale of misdirection and larger-than-life characters. Fans of J. A. Konrath's Jack Daniels series will love this." - Library Journal, starred review

"A whirlwind of a kooky crime novel, and readers will enjoy every minute of it. Coonts provides the perfect solution for readers waiting for the next Stephanie Plum book." - Booklist