Lulu and the Brontosaurus - by Judith Viorst 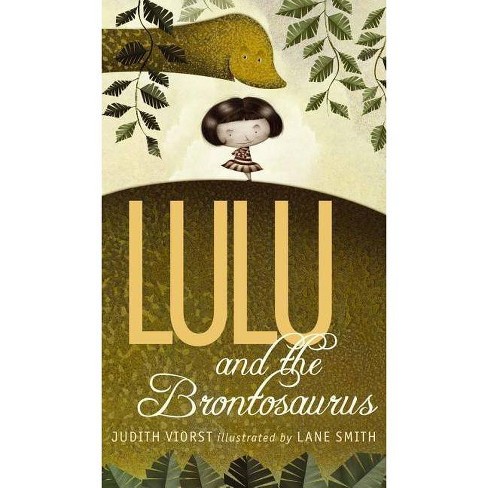 A Junior Library Guild Selection. It's Lulu's birthday, and she's decided she'd like a pet brontosaurus as a present. When Lulu's parents tell her that's not possible, Lulu gets very upset. So she takes matters into her own hands. Illustrations.

Now in paperback, an illustrated chapter book from industry legends Judith Viorst and Lane Smith! I'm gonna, I'm gonna, I'm gonna, gonna, get
a bronto-bronto-bronto-bronto-saurus for a pet! Lulu is so accustomed to getting what she wants that when her parents deny her birthday request for a brontosaurus, she throws a four-day temper tantrum and then storms off into the forest in search of the dinosaur she clearly deserves. Lulu isn't particularly impressed with the snake, tiger, and bear she encounters, but then she finds him--a beautiful, long-necked, graceful brontosaurus. Mr. B completely agrees with Lulu that having a pet would be a wonderful thing, and Lulu thinks she's gotten her birthday wish at last. Until she realizes that Mr. Brontosaurus thinks that she would make an ideal pet for him! How will Lulu ever get out of this sticky situation without throwing a fit (Mr. B does not respond well to those), or using force (Mr. B is much too tall to bonk on the head with her suitcase), or smushing her pickle sandwich? Beloved children's author Judith Viorst and Caldecott-winning illustrator Lane Smith offer a fresh and funny tale with several surprise endings!

"Plenty of child-friendly humor. . . . This inventive, lighthearted fantasy should be a solid hit with young readers looking for a lively first chapter book." --"School Library Journal"

Judith Viorst is the author of the beloved Alexander and the Terrible, Horrible, No Good, Very Bad Day, which has sold some four million copies; the Lulu books, including Lulu and the Brontosaurus; the New York Times bestseller Necessary Losses; four musicals; and poetry for children and young adults. Her most recent books of poetry include What Are You Glad About? What Are You Mad About? and Nearing Ninety. Lane Smith is the author-illustrator of Grandpa Green and the illustrator of The Stinky Cheese Man and Other Fairly Stupid Tales, both Caldecott Honor winners. His books have appeared on the New York Times Best Illustrated list four times, and several of his books, including It's a Book and John, Paul, George & Ben, have been New York Times bestsellers. He lives with book designer Molly Leach in rural Connecticut, and can be visited at LaneSmithBooks.com.
If the item details above aren’t accurate or complete, we want to know about it. Report incorrect product info.