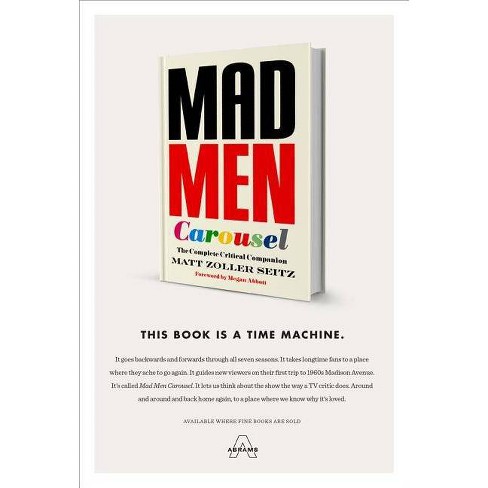 $27.50
0 out of 5 stars with 0 reviews
be the first!be the first! ratings
Shipping
Not available
Help us improve this page

Matt Zoller Seitz is the TV critic for New York Magazine, the editor-in-chief of RogerEbert.com, a finalist for the Pulitzer Prize in criticism, and the author of the New York Times bestsellers The Wes Anderson Collection (Abrams, 2013) and The Wes Anderson Collection: The Grand Budapest Hotel (Abrams, 2015), as well as the forthcoming The Oliver Stone Experience (Abrams, 2016). He is the founder and original editor of The House Next Door, now a part of Slant Magazine, and the publisher of Press Play, a blog of film and TV criticism and video essays.

A Brooklyn-based writer and filmmaker, Seitz has written, narrated, edited, or produced more than a hundred hours' worth of video essays about cinema history and style for The Museum of the Moving Image and The L Magazine, among other outlets. His five-part 2009 video essay, "Wes Anderson: The Substance of Style," was later spun off into The Wes Anderson Collection, and his 2008 video essay series "Oliver Stone: The Official History" is the partial basis for The Oliver Stone Experience.

Megan Abbott is the Edgar(R)-winning author of the novels Queenpin, The Song Is You, Die a Little, Bury Me Deep, The End of Everything, Dare Me, and her latest, The Fever, which was chosen as one of the Best Books of the Summer by the New York Times, People magazine, and Entertainment Weekly, and one of the Best Books of the Year by Amazon, National Public Radio, the Boston Globe, and the Los Angeles Times.

Her writing has appeared in the New York Times, Salon, the Guardian, the Wall Street Journal, the Los Angeles Times Magazine, the Believer, and the Los Angeles Review of Books. Abbott is also the author of a nonfiction book, The Street Was Mine: White Masculinity in Hardboiled Fiction and Film Noir, and the editor of A Hell of a Woman, an anthology of female crime fiction. She has been nominated for many awards, including three Edgar(R) Awards, the Hammett Prize, the Shirley Jackson Prize, the Los Angeles Times Book Prize, and the Folio Prize. She lives in New York City.

Max Dalton is a graphic artist living in Buenos Aires, Argentina by way of Barcelona, New York, and Paris. He has published a few books and illustrated some others, including The Wes Anderson Collection (Abrams, 2012) and The Wes Anderson Collection: The Grand Budapest Hotel (Abrams 2014). Max started painting in 1977 and since 2008, he has been creating posters about music, movies, and pop culture.
If the item details above aren’t accurate or complete, we want to know about it. Report incorrect product info.