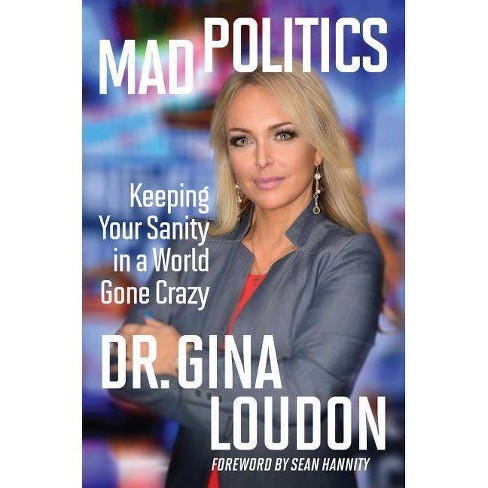 If the definition of insanity is doing the same thing over and over and expecting a different result, America has been insane for decades. We've elected establishment politicians on both sides of the aisle; we've hoped for change; and we've been disappointed. But with the election of Donald Trump, America tried something new. So we have to ask ourselves: what if Trump isn't the crazy man that the media pretends he is? What if he's actually the cure for a country who's been going mad for years? In Mad Politics, Fox News commentator, radio host, and psychological analyst Dr. Gina Loudon diagnoses the problem with America's status quo politics. Loudon has unique insight into both the Trump campaign and the larger political landscape as a member of the president's 2020 media advisory board, a former surrogate for his campaign, the wife of a former Senator from Missouri, the co-host of a national Television show, a seasoned psychological analyst on FOX News, CNN and others, and a twice pedigreed Master and Ph.D. With authority and wit, Mad Politics exposes cultural patterns that have led to today's political narcissism. She scans the psychological literature and illuminates a formula to answer the question: How can we restore a sound mind to the body politic? The answer, Loudon concludes, may be in joining Trump in a complete rejection of political correctness.
If the item details above aren’t accurate or complete, we want to know about it. Report incorrect product info.

A self helping book that changed me in good ways

5 out of 5 stars
Would recommend
Bella - 1 year ago
I met this author when I heard her speak at an event I attended and I was fascinated so I bought her book. I don’t normally write reviews but I have to this time because I read this book, and then I got her other two that I found online, and I love them. She writes like a novelist so the books are easy to read and filled with stories that I find myself actually using in my own life. This book is so motivational, and helped me see ways I was making mistakes in my own life with people and with work, and I am able to see things in a much better light now. I even had my 18 year old daughter read it, and I gave it for Christmas gifts because I know it will change peoples’ lives if they read it. I wasn’t sure about buying it when I originally saw the reviews on Amazon (many very positive but some really mean), but then I realized that because this author is so open about her life and beliefs (she has to be to tell the whole story), people apparently give her negative reviews because of her politics, if they don’t like Trump. Well I like him, but my daughter doesn’t and we both loved the book. So has everyone I have given it to. I think of it more like a self help book than a politics book. But that isn’t surprising since her background is in psychology and teaching, I believe. Highly recommend if you want to laugh, and cry, and learn how to live better!
Did you find this review helpful?
Report review

1 out of 5 stars
Would not recommend
Lmadarang - 1 year ago
This book is confusing to read as far as the writers style. It goes back and forth between random politics, history, bible versus, and personal rants. It is a very opinionated piece with very little verifiable facts. The facts that are included are misrepresented. For example, the author claims that most Asian-Americans swing conservative. But fails to detail that conservative values are not just bound to the Republican party. Conservatives are found in Democratic parties, independent parties and as a part of many different political affiliations around the world. I say this is a misrepresentation because real facts show most Asian-Americans voted democrat in 2016 elections. BUT i am also not sure why this is in her book because it failed to correlate this concept to anything at all. The author also mentions that she is certified in deception training meaning she allegedly tell if someone is lying by their non-verbal actions BUT again, she fails to give this any credibility. Like has she performed any work using this skill? Is she an expert. The author claimed that using her skills she has found that our president has not been untruthful. She did not detail her findings against the findings of experts in this field nor did she detail exactly why she came to this conclusion. Many licensed psychologists and even the American Psychological Association have come out and said that the author is in no position to make these claims or provide the imaginary diagnoses that she has. It is not really worth reading.
Did you find this review helpful?
Report review