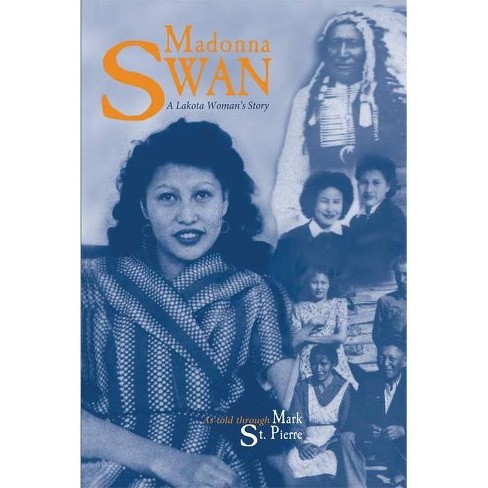 $16.19
no reviews yet
be the first!be the first! ratings
Shipping
Free standard shipping with RedCard
Loading, please wait...
Help us improve this page

In Madonna Swan: A Lakota Woman's Story, Mark St. Pierre skillfully weaves together his interviews with Madonna Swan-Abdulla to capture the indomitable spirit of a Lakota woman as she celebrates the joys and endures the sufferings of her remarkable life on the Cheyenne River Sioux Reservation in South Dakota.

Born in 1928, Madonna Swan was winona -- the first-born daughter-of Lucy High Pine and James Swan. She held a special place in an extended family of grandparents, parents, and ten brothers and sisters.

For the Swans, as for other Lakota Sioux, life on the reservation in the first half of the twentieth century was appallingly difficult. In her narrative, Madonna details her life-her earliest childhood memories, the Lakota traditions taught by her grandparents, the daily struggle against poverty and prejudice, and her education at Stephan Mission, South Dakota.

Stricken with dreaded tuberculosis at age sixteen, she survived nearly seven years in Sioux Sanitorium, a place where most other Sioux victims of TB quickly expired. Madonna's strength of spirit and determination to live carried her through the chanhu sica bad lungs-and into a new life, free of disease. She survived to marry, have a family, go to college, and teach in the reservation's Head Start program. A symbol of courage for all women, Indian and non-Indian alike, Madonna Swan-Abdulla was named North American Indian Woman of the Year in 1983. She still lives on the Cheyenne River Sioux Reservation, where her Lakota people honor her as matriarch.
If the item details above aren’t accurate or complete, we want to know about it. Report incorrect product info.