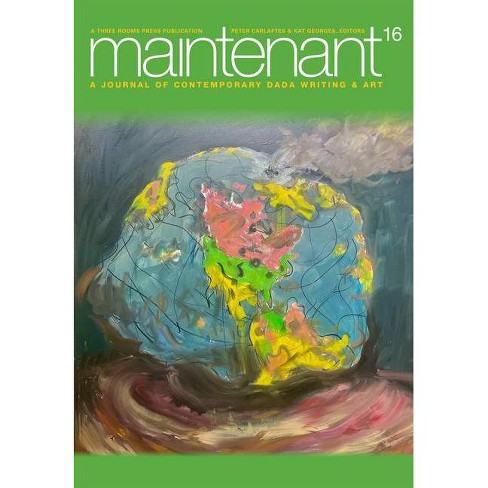 "A compilation of leading Dada-influenced artists from around the world." ―TRIBE LA Magazine The 2022 edition of the world's premiere journal of contemporary dada writing and art continues a revolutionary approach to creation, inspired by the Dada movement.

These days you hear a lot about NET ZERO, in reference to steps being taken to combat climate change. NET ZERO refers to the balance between the amount of greenhouse gas produced and the amount removed from the atmosphere. At this time, NET ZERO is an ambition lacking absolute definition as corporate energy titans pledge distant adherence without clear or immediate commitments to act. In fact, these so-called "innovative" scions of wealth seem to not even be able to remove the layer of hot air greenhouse gases spewing from the mouths of the pundits and politicos pushing the affirmation of their endlessly pernicious promises. Enter NYET ZERO.

With NYET ZERO, MAINTENANT 16 makes an artistic power grab using DADA--in the form of original art, poetry, and writing aimed at exposing the hypocrisy of the engine-idle rich on recycled paper. We can change the now with art and thought. Otherwise, the future has NOTENTIAL.

When the corporate powers that be control all of the energy resources, Art Becomes A Necessity!!! Or as Tristen Tzara put it in his Dada Manifesto, "Dada Dada Dada, a roaring of tense colors, and interlacing of opposites and of all contradictions, grotesques, inconsistencies: LIFE!"

For the first time since debuting in 2008, MAINTENANT 16 includes work from all seven continents on the planet, with more than 250 creators from 35 countries. The MAINTENANT series gathers the work of internationally-renowned contemporary Dada artists and writers. MAINTENANT 16 offers compelling proof that concepts of Dada continue to serve as a catalyst to creators more than a century later. The annual MAINTENANT series, established in 2008, gathers work of contemporary Dada artists and writers from around the world. Past issues include work by artists Mark Kostabi, Raymond Pettibon, Joel Hubaut, Giovanni Fontana, Nicole Eisenmann, Jean-Jacques Lebel, and Kazunori Murakami; writers include Gerard Malanga, Charles Plymell, Andrei Codrescu, and more, with a strong contingent of artist-writers from the world of punk rock, including Thurston Moore, Mike Watt, Alice Bag and more.

"Though people expect Dada to be silly, and sometimes it is here, it is also often political and usually poignant. . . It's quite a smorgasbord for those who are sick and tired of it." ―Seattle Book Review "A compilation of leading Dada-influenced artists from around the world." ―TRIBE LA Magazine
"Excellent examples of collage and montage techniques . . . Interesting visual poems." ―Portland Book Review
"Contemporary art and writing ranging from collages and acrylics to new digital art motifs and using computers to create art . . . As always it brings an interesting perspective." ―Manhattan Book Review

KAT GEORGES is a New York City-based poet, playwright, performer, publisher, and graphic designer. She has written and staged twelve plays, and is the author of two books: Our Lady of the Hunger and Three Somebodies: Plays about Notorious Dissidents. Her poetry and prose work has appeared in The San Francisco Chronicle, The Outlaw Bible of American Poetry, Have A NYC: New York Stories, Signs of Life: San Francisco Short Stories, and numerous regional and international journals and magazines. In New York since 2003, she has directed numerous Off-Broadway plays, produced more than 300 events, and performed widely. She is co-founder, editor, and artistic director of Three Rooms Press (New York). She lives in Manhattan.
If the item details above aren’t accurate or complete, we want to know about it. Report incorrect product info.