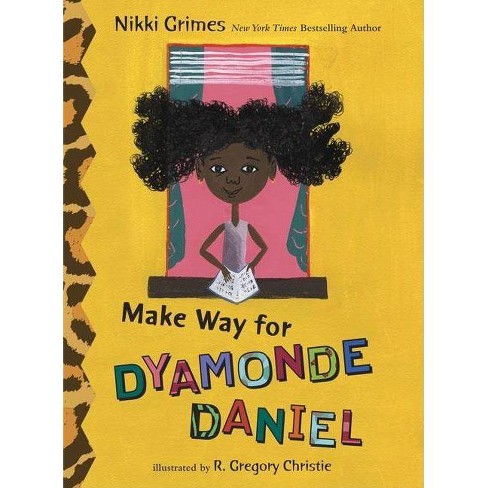 Dyamonde Daniel may be new in town, but that doesn't stop her from making a place for herself. With her can-do attitude and awesome brain power, she's takes the whole neighborhood by storm. Illustrations.

Dyamonde Daniel may be new in town, but that doesn't stop her from making a place for herself in a jiffy. With her can-do attitude and awesome brain power she takes the whole neighborhood by storm. The only thing puzzling her is the other new kid in her class. He's awfully grouchy - but Dyamonde's determined to get to the bottom of his frowning attitude and make a friend. Readers will fall in love with Dyamonde Daniel, the spirited star of a new series by Nikki Grimes. With her upbeat, take-charge attitude, Dyamonde is a character to cheer for - and the fun, accessible storytelling will hook kids from the first page.

Dyamonde, a third grader, has wild-crazy hair, is skinnier than half a toothpick and is more than equal to the challenge of entering the crowded field of confident grade school heroines.--New York Times

Nikki Grimes is the award-winning, New York Times bestselling author of dozens of children's and young adult books as well as a poet and journalist. Among the many accolades she has received are the Golden Dolphin Award (2005), the NCTE Award for Excellence in Poetry for Children (2006), the Coretta Scott King Award (2003) for Bronx Masquerade, and the Horace Mann Upstanders Award (2011) for Almost Zero: A Dyamonde Daniel Book. Additionally, her book Barack Obama: Son of Promise, Child of Hope (illustrated by Bryan Collier) was a New York Times bestseller, and she was acknowledged as an NAACP Image Award Finalist in 1993 for her book Malcolm X: a Force for Change. Her books Meet Danitra Brown (illustrated by Floyd Cooper), Jazmin's Notebook, Talkin' About Bessie (illustrated by E.B. Lewis), Dark Sons, The Road to Paris, and Words with Wings were each awarded Coretta Scott King Honors. Visit her online at www.nikkigrimes.com.
If the item details above aren’t accurate or complete, we want to know about it. Report incorrect product info.