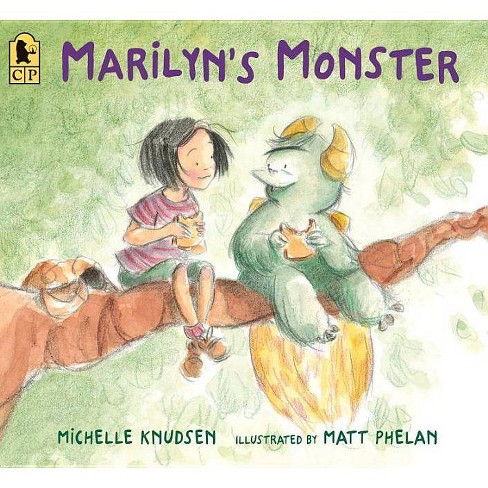 $7.89
MSRP$7.99
undefined out of 5 stars with 0 reviews
be the first!be the first! ratings
Help us improve this page

A lot of Marilyn's friends have monsters. Each one is just right for its boy or girl. Marilyn really wants a monster, too, but despite her efforts to be the kind of girl no monster could resist, hers just doesn't come. What could be taking it so long?

"Rich with feeling . . . a warm, gently funny reminder to chase down one's dreams, rather than waiting for them to appear on the doorstep." -- Publishers Weekly (starred review) Some of the kids in Marilyn's class have monsters. Marilyn doesn't have hers yet, but she can't just go out and look for one. Your monster has to find you. That's just the way it works. Marilyn tries to be patient and the kind of girl no monster can resist, but her monster doesn't come. Could she go out and search for him herself? Even if that's not the way it works?

Knudsen ("Library Lion") once more offers a gentle reminder that sometimes you have to break a rule in order to do the right thing. ...It's a lesson ideally suited for a helicopter-parented, standardized-test-soaked generation of girls -- and boys, too -- who are offered few chances to advocate for themselves and solve their own problems.
--The New York Times Rich with feeling, it's a warm, gently funny reminder to chase down one's dreams, rather than waiting for them to appear on the doorstep.
--Publishers Weekly (starred review) Knudsen's charming story is a great fit for Phelan's gentle watercolor-and-pencil illustrations. With just a few lines and brushstrokes, he depicts the wide range of Marilyn's emotions, from wary hopefulness to sullen grumpiness to, finally, utter joy. The whimsical, friendly monsters are equally expressive, and their supernatural antics in the background will tickle funny bones. Little ones feeling lonely or worried about making friends will be empowered by Marilyn's determined, take-charge attitude.
--Booklist A surprising spin on monsters with nicely effective artwork--and heart.
--Kirkus Reviews Every one of Phelan's monsters is wonderfully weird, and readers will have fun noting similarities between them and their human friends.
--School Library Journal In Mr. Phelan's tender and witty pencil drawings, we see goofy, preposterous monsters choosing their human companions.... Ms. Knudsen has packed a surprising amount of relatable emotion into this story of humility and derring-do.
--The Wall Street Journal This is an intriguing and offbeat story, and Knudsen's matter-of-fact narration effectively draws readers into the situation, while subtly engaging kids at their emotional core.
--Bulletin of the Center for Children's Books The green-toned watercolor and colored pencil illustrations will delight young readers
--School Library Connection

Michelle Knudsen is the author of the New York Times best-selling picture book Library Lion, illustrated by Kevin Hawkes, as well as Argus, illustrated by Andréa Wesson, and Big Mean Mike, illustrated by Scott Magoon. She is also the author of the young adult novel Evil Librarian and the middle-grade novels The Dragon of Trelian and The Princess of Trelian. Michelle Knudsen lives in Brooklyn, New York. Matt Phelan is the author-illustrator of the picture book Druthers as well as the highly acclaimed and award-winning graphic novels The Storm in the Barn, Around the World, and Bluffton. He is also the illustrator of many books for young readers, including Always and I'll Be There by Ann Stott and The Higher Power of Lucky by Susan Patron, which won the 2007 Newbery Medal. He lives near Philadelphia.
If the item details above aren’t accurate or complete, we want to know about it. Report incorrect product info.