Marry in Scandal - (Marriage of Convenience) by Anne Gracie (Paperback) 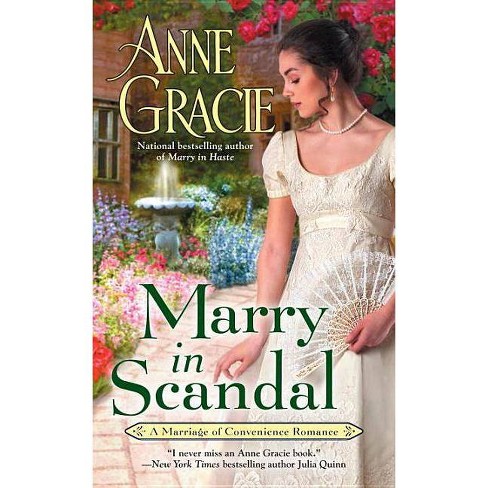 A shy heiress and a well-known rake face a scandal-forced marriage that mightbe true love in the latest irresistible romance from the national bestsellingauthor of "Marry in Haste." Original.

A shy heiress and a well-known rake face a scandal-forced marriage that might be true love in the latest irresistible romance from the national bestselling author of Marry in Haste. Shy young heiress, Lady Lily Rutherford, is in no hurry to marry. She dreams of true love and a real courtship. But when disaster strikes, she finds herself facing a scandal-forced marriage to her rescuer, Edward Galbraith, a well known rake. Despite his reputation Lily is drawn to the handsome Galbraith. In the gamble of her life, she agrees to marry him, hoping to turn a convenient marriage into a love match. As heir to a title, Galbraith knows he must wed, so a convenient marriage suits him perfectly. But there is a darkness in his past, and secrets he refuses to share with his tender-hearted young bride. All Lily's efforts to get close to him fall on stony ground, and in desperation she retreats to his childhood home--the place he's avoided for nearly a decade. Must Lily reconcile herself to a marriage without love? Or will Galbraith realize that this warm-hearted, loving girl is the key to healing the wounds of his past--and his heart?

[A] confection that brims with kindness and heartfelt sincerity...you can't do much better than Anne Gracie who offers her share of daring escapes, stolen kisses, and heartfelt romance in a tale that carries the effervescent charm of the best Disney fairy-tales.
--Entertainment Weekly

Anne Gracie is the award-winning author of the Marriage of Convenience Romances and the Chance Sisters Romances. She spent her childhood and youth on the move. The gypsy life taught her that humor and love are universal languages and that favorite books can take you home, wherever you are. Anne started her first novel while backpacking solo around the world, writing by hand in notebooks. Since then, her books have been translated into more than sixteen languages, and include Japanese manga editions. As well as writing, Anne promotes adult literacy, flings balls for her dog, enjoys her tangled garden, and keeps bees.
If the item details above aren’t accurate or complete, we want to know about it. Report incorrect product info.