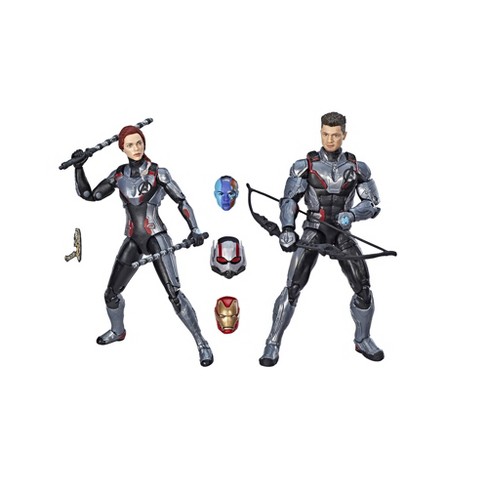 $39.99
4.7 out of 5 stars with 66 reviews
6666 ratings
WARNING: choking hazard - small parts. Not for children under 3 yrs.
Shipping
No longer available
See similar items
Help us improve this page

From the ranks of S.H.I.EL.D. to the growing team of Avengers, Black Widow and Hawkeye put their expert training to use as they suit up to defend their world and universe from intergalactic threats.

With the Legends Series, kid and adult Marvel fans can start a legendary collection of comic- and movie-based Marvel characters (each sold separately). These 6-inch-scale Black Widow and Marvel's Hawkeye figures are highly articulated and feature movie-inspired design, making them another worthy addition to the Marvel Legends Series. Pack includes interchangeable Ant-Man, Iron Man, and Marvel's Nebula heads to create different figures from the Avengers universe.

Includes: 2 figures and 7 accessories.
Figure scale: 6 inches
Ages 4 and up
WARNING: CHOKING HAZARD - Small parts. Not for children under 3 years.

Copyright 2018 MARVEL.
Hasbro and all related terms are trademarks of Hasbro.
If the item details above aren’t accurate or complete, we want to know about it. Report incorrect product info.

4 out of 5 stars
Would recommend
victor4782 - 9 months ago, Verified purchaser
With their basic lineup of figures released, Marvel Legends brings in its exclusives in this set which includes Hawkeye and Black Widow. Having already several Hawkeye and Black Widow action figures didn’t deter me from wanting another set like this, especially because of their guises from Avengers: Endgame. Hawkeye is great. Looking like he does in the movie when he dons his Time Travel Avengers suit. From being the eager volunteer for the only test run available to walking alongside his comrades in their journey back in time. With only two versions of Hawkeye available from Marvel Legends, or three if you count the masked Ronin, this version of Hawkeye is a brand new sculpt of his face straight from the movie. With the body, however, seeming to be a replica of Captain America action figure in the Time Travel suit. Either way, it's not accurate to the movie, being more silver than the white that was done in the movie. My guess is because white isn’t easy to paint for the figure. Standing at 6.25 inches and with the same articulation as the other Marvel Legends figures. Included as an accessory is a bow. Black Widow is very nice. Looking like it does in the movie when she dons her Time Travel Avengers suit. It's just the one scene of her in her suit walking next to her comrades as they journey back in time. With three versions of Black Widow available from Marvel Legends, this Black Widow is a brand new sculpt of her face from the movie, red hair with blonde tresses. The body is a brand new sculpt, once again not as accurate to the movie. Standing at 6.00 inches and with decent articulation. Included as an accessory is a reissue of the Infinity War baton-staff which can be either two batons or one long staff. Though this set has two action figures, included also is the opportunity to switch it up. Hawkeye’s head can be replaced by two other heads. One an Ant-Man head and the other an Iron Man head. Having purchased the Ronin action figure, I prefer the figure having Ant-man's head. But whether it's Iron Man or Ant-Man, it's not accurate to the film. While both heroes would wear the Time Travel suit, they didn’t have this style of a helmet to their suit, but an identical uniform helmet. If anything, I would have preferred an alternate head of an unmasked Tony Stark and Scott Lang. Black Widow’s head can be replaced by a Nebula head. Looking exactly how she does in her suit walking next to her comrades as they journey back in time. Though I do love Black Widow, thanks to having the Infinity War version of her, I prefer Nebula. As an added accessory, this figure has her pistol. A modest collection. Happy to have this after watching Avengers: Endgame.
5.0
broad age appeal
out of 5
broad age appeal: 5 out of 5
5.0
length of play
out of 5
length of play: 5 out of 5
5.0
quality
out of 5
quality: 5 out of 5
5.0
value
out of 5
value: 5 out of 5
1 guest found this review helpful. Did you?
Report review

Somebody swapped the body

A Marvel Legends 2 Pack Worth the Retail Price

5 out of 5 stars
theCollector - 1 year ago, Verified purchaser
Great figures. Hasbro put enough extra heads to give us the choice to make some of the other characters. But you'll need to buy another set for the other bodies. Overall a very nice 2-pack with some of the best head sculpts to date.
3 guests found this review helpful. Did you?
Report review

5 out of 5 stars
Would recommend
Star Trek fan - 1 year ago, Verified purchaser
These figures have great likenesses to the actors!
1 guest found this review helpful. Did you?
Report review