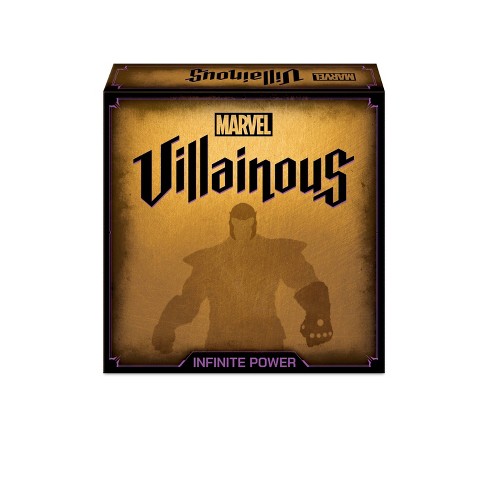 2021 Toy of the Year Award Finalist

Dominate the Marvel Universe as Thanos, Hela, Ultron, Killmonger, or Taskmaster! Follow your own twisted path to victory, using sinister abilities to take on other Villains and mighty Heroes from across the universe. Face off against Iron Man, Captain America, Black Widow, Hulk, Thor, Captain Marvel, and the other Avengers!
Marvel Villainous: Infinite Power utilizes the existing platinum-selling Villainous game system with a few gameplay reflecting the shared universe and interwoven storylines of Marvel’s Villains. As such, Marvel Villainous is not designed to be compatible with previous Villainous games, but allows for increased player interaction and more strategic play.
Playing Marvel Villainous
Take on the role of a comic book Villain in this asymmetric card game, and compete to complete your unique objective first. On your turn, you’ll move your Villain to a new location in your Domain and carry out the actions indicated by the icons there.
Icons allow you to gain power, play cards, vanquish Heroes, move Allies and Items around your Domain, and more. Players will pay power to play cards from their Villain deck, which contains Ally, Item, Effect, and Specialty cards to help you towards your objective. Specialty cards are new to Marvel Villainous and are used to make Villains even more formidable. Once played, each Specialty card can be used once per turn.
Players can also meddle with the fortunes of other Villains by playing Heroes, Events, Items, and Effects from the Fate deck. Also new to Marvel Villainous, Event cards inflict an ongoing penalty while in play. Villains must play Allies to Events to defeat them. All Villains with Allies at Events when the Event is resolved receive a reward. Three different game modes allow players to scale the difficulty of their game by facing more or fewer Events.
2021 Toy of the Year Award Finalist
Known as the “Oscars” of the toy industry, the Toy of the Year (TOTY) Awards are presented annually to the top toys, games, and properties of the year. Administered by The Toy Association, the awards program supports the philanthropic work of The Toy Foundation, which delivers new toys to children in need.
If the item details above aren’t accurate or complete, we want to know about it. Report incorrect product info.