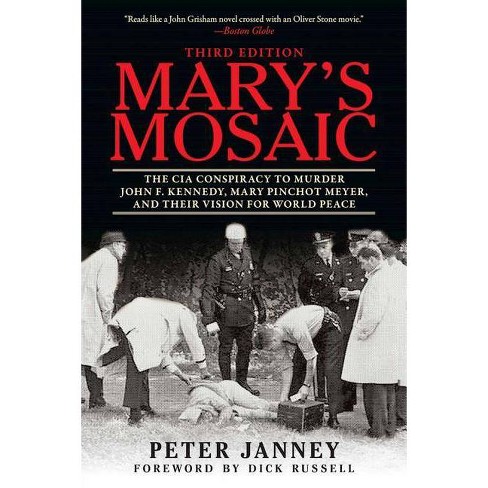 $9.99
MSRP$16.99
no reviews yet
be the first!be the first! ratings
Shipping
Free standard shipping with RedCard
Loading, please wait...
Help us improve this page

"Kennedy scholars, JFK assassination researchers, and all concerned Americans owe Peter Janney their deep gratitude for his relentless exploration into the professional-style murder of Mary Meyer--a woman who, as Kennedy's mistress and a former CIA wife, simply knew too much for her own good. Janney, who knew and adored Meyer as a boy, brings his own personal sense of mission to this investigative project. The story of Meyer's murder, and its cover up, is one more fascinating footnote to the Kennedy assassination . . . and it shines an important light on the forces behind the tragic events in Dallas, a tragedy from which the country is still suffering."
--David Talbot, founder of Salon, and New York Times bestselling author of The Devil's Chessboard: Allen Dulles, the CIA, and the Rise of America's Secret Government, and Brothers: The Hidden History of the Kennedy Years "Reads like a John Grisham thriller crossed with an Oliver Stone movie."
--Boston Globe "Mary's Mosaic just might have solved a great murder mystery. This is a must-read."
--Jim Marrs, author of the New York Times bestseller Rule by Secrecy "A fascinating story . . . Peter Janney's unsparing analysis moves us closer to a reckoning."
--Oliver Stone "Peter Janney, with passion and historical accuracy, has compelled us to become aware of the extraordinary life of Mary Pinchot Meyer, and to confront the long hidden facts and dark official secrets which resulted in her political assassination in 1964. As a result of Mr. Janney's decades long work, I have no doubt that, in significance and purpose, this murder ranks alongside the other assassinations of the 1960s. She was not only the singular soul mate and lover of President John Kennedy, but the inspiration for his commitment to turn our Republic away from the Cold War and toward world peace. Mary's Mosaic is a fitting, long overdue tribute to this courageous woman who was determined to secure truth and justice concerning the assassination of the man she loved and the mission they shared."
--Dr. William F. Pepper, Esq., author of Orders to Kill, An Act of State, and The Plot to Kill King "Mary's Mosaic is a story about intertwined destinies, about human strength and weakness, and finally about forces of good and evil. The book makes a reader consider those possibilities within each of us, even as what unfolds is on a Shakespearean stage."
--Dick Russell, New York Times bestselling author and author of The Man Who Knew Too Much and On the Trail of the JFK Assassins "Mary's Mosaic introduced me to a crucial new aspect of the Kennedy presidency that I was unfamiliar with. It taught me about the remarkable extent to which President Kennedy shared with his final amour, his true soul mate, the inner foreign policy workings of his administration--and the extent to which Mary Pinchot Meyer apparently challenged and influenced Jack Kennedy during the final two years of his Presidency. She was apparently there, beside him every step of the way, throughout 1963, as he embarked upon his quest to try to end the Cold War, and return sanity to America's foreign policy. Perhaps the most chilling aspect of this mesmerizing book is the detailed and convincing manner in which it reveals the suffocating power of the official JFK assassination cover-up imposed by the U.S. government immediately after his death--the power to manipulate the media and to steal documents; the willingness to manipulate the judicial system by aggressively attempting to frame an innocent man for a crime he did not commit; and even the willingness to commit murder to silence one brave and respected citizen who was about to publicly oppose the sham conclusions of the Warren Report. Mary Meyer paid for her bravery--and her loyalty--with her life, but Peter Janney has rewarded her courage by publicly revealing, for the first time, the true and complete story of her relationship with President Kennedy during the fateful final year of his life."
--Douglas P. Horne, Chief Analyst for Military Records, The Assassination Records Review Board (ARRB) and author of Inside the Assassination Records Review Board: The U.S. Government's Final Attempt to Reconcile the Conflicting Medical Evidence in the Assassination of JFK, Vols. I-V "Hollywood has dealt with JFK's assassination, most famously in Oliver Stone's Oscar-winning JFK (1991) questioning the official line that Lee Harvey Oswald and Jack Ruby acted alone . . . A bunch of hooey, I thought--until I discovered Mary's Mosaic: The CIA Conspiracy to Murder John F. Kennedy, Mary Pinchot Meyer and Their Vision for World Peace by Peter Janney."
--Mary Claire Kendall, Forbes contributor
If the item details above aren’t accurate or complete, we want to know about it. Report incorrect product info.