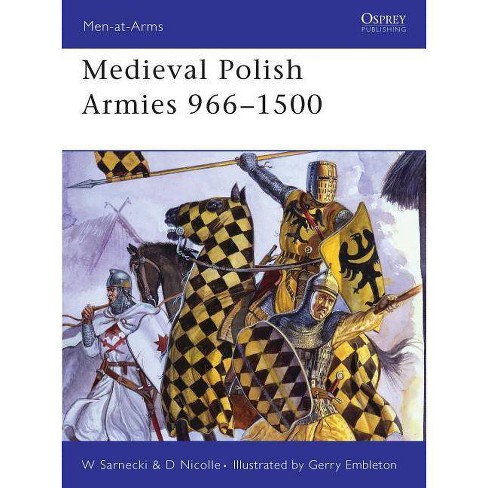 $17.49
MSRP$17.95
no reviews yet
be the first!be the first! ratings
Shipping
Free standard shipping with RedCard
Loading, please wait...
Help us improve this page

"This is a superb book for anyone interested in the medieval period, covering an often-neglected area. Western, particularly German, styles of arms and armour mixed with those of eastern areas to produce a fascinating variety, and they're all well-illustrated and described here. We also get a potted history of Poland and its fights against foreign invasion over the centuries... Very highly recommended." --John Prigent, Internet Modeler (March 2008)

"Supplied with a wealth of illustration, Medieval Polish Armies pulls out all the stops; a clear and concise reference guide, it provides extensive detail regarding the source of its material, including tomb effigies, etchings, and contemporary art that often becomes the best source for determining what types of weaponry and armor were in use in a specific time and location...Far more than the historian's equivalent of Cliffs Notes, this book, like its companions, is an invaluable addition to any medieval library; its value to re-enactors, writers, modelers and scholars alike far outstrips the slim volume's weight in gold." --Richard MacKenzie, Renaissance Magazine (January 2009)

"In all, Sarnecki and Nicolle's volume on this important part of history is not only the first done in English, but is a fascinating look into the events of the time. A book you'll be sure to find fascinating." --Scott Van Aken, modelingmadness.com (May 2008)