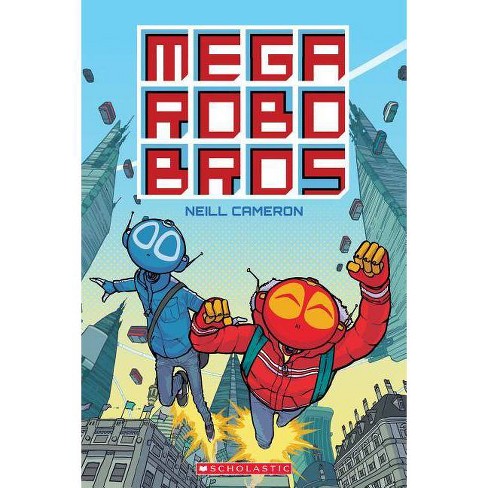 $7.49
MSRP$8.99
undefined out of 5 stars with 0 reviews
be the first!be the first! ratings
Help us improve this page

A ridiculously fun, action-packed graphic novel about two robot brothers who take turns saving the world of the future...

A ridiculously fun, action-packed graphic novel about two robot brothers who take turns saving the world of the future... when they're not fighting each other or being grounded by their parents!London! The future!Alex and Freddy are just like any other brothers. They squabble. They drive their parents crazy. There's only one difference...They're the most powerful robots on Earth!But Alex and Freddy will soon discover that they're not the only super-powered robots around. For an evil robotic mind is making sinister plans, and their lives won't stay peaceful for much longer...

Prace for Mega Robo BrosMasterful and immersive . . . An immensely smart, fun, and nuanced series opener. --Kirkus (Strarred Review)Along with an expansive commitment to diversity, Cameron evinces a knack for programming unusually deep thoughts into the motherboard of his fast-paced family superhero adventure. --BooklistCameron delivers an energized and goofy romp featuring siblings whose relationship is equal parts bickering, rivalry, and camaraderie-just like that of many human brothers. --Publisher's Weekly

Neill Cameron is a cartoonist and writer, creator of How to Make Awesome Comics. Since 2011 his work has appeared in the weekly children's comic The Phoenix, where he produces - amongst other things - the robotic soap opera comedy Mega Robo Bros, and (with artist Kate Brown) the Cornish-set fantasy drama Tamsin and the Deep. Neill is also currently artist in residence at The Story Museum in Oxford, where he has contributed several large-scale comic strip installations and is involved in comics-based education and activities. You can find him online at http: //www.neillcameron.com.
If the item details above aren’t accurate or complete, we want to know about it. Report incorrect product info.