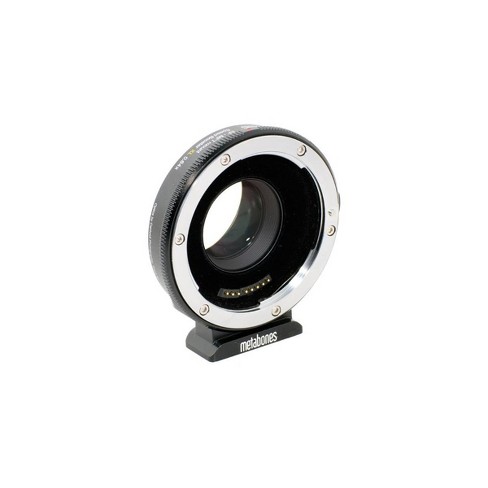 $649.00
0 out of 5 stars with 0 reviews
be the first!be the first! ratings
Sold and shipped by Adorama Camera
Help us improve this page

Optical. Increase maximum aperture by 11/3 stop. Increase MTF. Makes lens 0.64x wider. Patented 6-element/4-group optical design by Caldwell Photographic in the USA. Supports 4k video mode with DX lenses. Electronic. Auto focus on Panasonic Micro Four Thirds cameras. Can be powered either by camera body or by third-party external 5V power source (not included). Iris/aperture controlled by the camera body. Image stabilization (IS) lens support. Electronic manual focusing (e.g. EF 85/1.2L II and discontinued EF 50/1.0L). EXIF (focal length, aperture, zoom range). Distance and zoom display on camcorders (requires lenses supporting distance information). Other. Detachable tripod foot compatible with Arca Swiss, Markins and Photo Clam ball heads. The interior is painted with flocking coating to further reduce the internal reflection. Limitations. Supports only Panasonic GH4, GH3, G3, G5, G6, G7, G10, GF3, GF5, GF6, GX1, Olympus E-PL7, Blackmagic Cinema Camera with Micro Four Thirds mount, Blackmagic Pocket Cinema Camera. EF-S lenses require modification to fit (but third party DX lenses can be used without modification). EF-S and third party DX lenses may not cover the full Micro Four Thirds sensor in still photo and FHD video modes (but will cover 4k video mode). No autofocus support for JVC and Olympus. AFC (continuous AF) and AFF (flexible AF) modes are not supported. No 24p video AF. Video AF may hunt more than a native lens. No support for in-camera correction such as peripheral shading, CA and distortion. A new Micro-4/3 mount Speed Booster adapter designed exclusively for the Panasonic GH4 and other selected Micro Four Thirds cameras (refer to the below camera compatbility table), with a magnification of 0.64x. The Speed Booster XL 0.64x uses an advanced 6-element optical design to achieve extraordinary optical performance at apertures up to an incredible f/0.80, a new record for Micro Four Thirds format. The new Speed Booster XL 0.64x reduces the full-frame crop factor of the Panasonic GH4 from 2.0x to 1.28x, thus effectively transforming these cameras into APS-H format. When the GH4 is used in Cinema 4k video mode the horizontal full frame crop factor is reduced from 2.34x to 1.50x, thus effectively transforming the GH4 into a super-35 format 4k cine camera. In addition, the speed of any attached lens is increased by 11/3 stops, with a maximum output aperture of f/0.80 when an f/1.2 lens is used. For example, a 50mm f/1.2 becomes a 32mm f/0.80, which is the fastest aperture available for full size Micro Four Thirds format. Compatibility. The Speed Booster XL 0.64x is similar to the Blackmagic-specific 0.64x BMCC Speed Booster (MB_SPEF-BMCC-BM1), but has been completely re-designed to meet the following requirements:. The working distance has increased by 1mm to permit use on the Panasonic GH4 and a number of other Micro Four Thirds cameras without touching the flexible outer cover of the camera's shutter mechanism. The optics are optimized for a standard Micro Four Thirds filter stack thickness of 4mm rather than the 2.4mm found in Blackmagic cameras. The image circle diameter has been increased to 21.63mm so that the full 17.3mm x 13mm Four Thirds format is covered. This has been achieved while maintaining unusually high image quality over the 17.4mm image circle used by the Panasonic GH4 in its Cinema 4k video mode. Although the Speed Booster XL 0.64x has extra clearance compared to the 0.64x BMCC Speed Booster, there are still a number of Micro Four Thirds cameras that are not supported due to mechanical clearance issues. This is summarized in the table below, which is color-coded so that Green means the camera is supported and Red means the camera is not supported. Note that many of the Red-coded.
If the item details above aren’t accurate or complete, we want to know about it. Report incorrect product info.