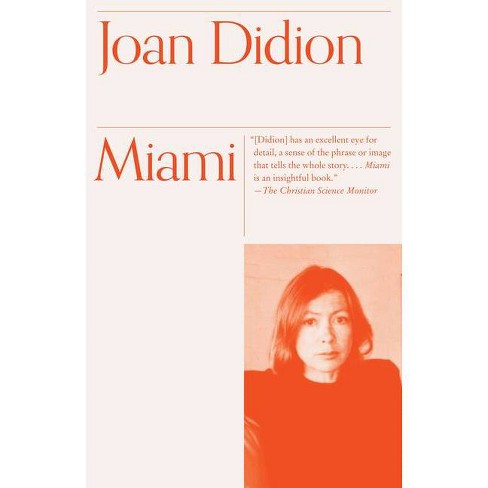 With her usual sharp eye for the realities of American life, Joan Didion explores an American city of glitter and glamour, a city of racial tension and fast money whose culture, history, and state of mind are inextricably linked with Cuba, only 90 miles away. An Editor's Choice selection of the New York Times and Time.

Miami is not just a portrait of a city, but a masterly study of immigration and exile, passion, hypocrisy, and political violence, from the bestselling, award-winning author of The Year of Magical Thinking and Let Me Tell You What I Mean. It is where Fidel Castro raised money to overthrow Batista and where two generations of Castro's enemies have raised armies to overthrow him, so far without success. It is where the bitter opera of Cuban exile intersects with the cynicism of U.S. foreign policy. It is a city whose skyrocketing murder rate is fueled by the cocaine trade, racial discontent, and an undeclared war on the island ninety miles to the south. As Didion follows Miami's drift into a Third World capital, she also locates its position in the secret history of the Cold War, from the Bay of Pigs to the Reagan doctrine and from the Kennedy assassination to the Watergate break-in.

Her prose is . . . finely tuned . . . . [Miami] turns much sunny light into a murky underwater darkness full of sharks and evil shadows. --The New York Times

Didion's Miami is a kaleidoscope of impressions, and a litany of violence, intrigue, vengeance, political manipulation, and broken dreams. --Boston Globe

JOAN DIDION was born in Sacramento in 1934 and graduated from the University of California, Berkeley, in 1956. After graduation, Didion moved to New York and began working for Vogue, which led to her career as a journalist and writer. Didion published her first novel, Run River, in 1963. Didion's other novels include A Book of Common Prayer (1977), Democracy (1984), and The Last Thing He Wanted (1996). Didion's first volume of essays, Slouching Towards Bethlehem, was published in 1968, and her second, The White Album, was published in 1979. Her nonfiction works include Salvador (1983), Miami (1987), After Henry (1992), Political Fictions (2001), Where I Was From (2003), We Tell Ourselves Stories in Order to Live (2006), Blue Nights (2011), South and West (2017) and Let Me Tell You What I Mean (2021). Her memoir The Year of Magical Thinking won the National Book Award for Nonfiction in 2005. In 2005, Didion was awarded the American Academy of Arts & Letters Gold Medal in Criticism and Belles Letters. In 2007, she was awarded the National Book Foundation's Medal for Distinguished Contribution to American Letters. A portion of National Book Foundation citation read: An incisive observer of American politics and culture for more than forty-five years, Didion's distinctive blend of spare, elegant prose and fierce intelligence has earned her books a place in the canon of American literature as well as the admiration of generations of writers and journalists." In 2013, she was awarded a National Medal of Arts and Humanities by President Barack Obama, and the PEN Center USA's Lifetime Achievement Award. Didion said of her writing: I write entirely to find out what I'm thinking, what I'm looking at, what I see and what it means." She died in December 2021.
If the item details above aren’t accurate or complete, we want to know about it.

Where I Was from - (Vintage International) by Joan Didion (Paperback)