Mischief and Mayhem #2: The Cursed Bunny - by Ken Lamug 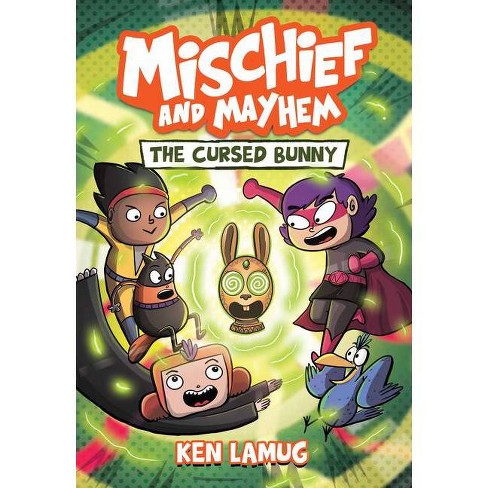 Mischief and Mayhem are BACK to tackle middle school and cursed bunny heads in this hysterical full-color graphic novel sequel from author-illustrator Ken Lamug. This page-turner is perfect for fans of the Dog Man and Lunch Lady series!

Missy already defeated her former best friend, the supervillain Melvira, in an epic showdown, so how hard can making friends at middle school be?

But when a "reformed" Melvira suddenly enrolls at Missy's school and wants to run for student body president . . . Missy knows in her gut that Melvira and her league of supervillains must be up to evil again. After food fights and catfights, Missy and Melvira land in detention together, where they're reminded of how great their friendship used to be. And maybe they could they be friends again--but that didn't go so well the first time...

Then a cursed bunny head begins to turn their town into zombies, and the two may have to team up once more to fight the greater evil. Can the former best friends turned archenemies still be true sisters-in-trouble?

"Packed with thrills and quirky humor, Lamug has created characters whose personalities burst with energy. This fast-paced story breathes life into a young, inventive female character who learns that sometimes the greatest powers lie within." -- Publishers Weekly

"Mischief and Mayhem are delightfully irreverent. Pilkey fans will likely adore this duo who follow their own bliss. Lamug's humor and illustrative style are unique, and this take on the joy of (limited) villainy is fresh, boldly drawn, and playful." -- Bulletin of the Center for Children's Books

"The action hurtles along through panels of hyperkinetic cartoon action and snarky banter to a climactic face-off featuring epic robot battles, lots of slime and toilet paper. A rousing kickoff for the Captain Underpants crowd." -- Kirkus Reviews

Mischief and Mayhem #1: Born to Be Bad - by Ken Lamug

The Beast of Buckingham Palace - by David Walliams

Mischief and Mayhem #2: The Cursed Bunny - by Ken Lamug (Paperback)

Mischief and Mayhem #1: Born to Be Bad - by Ken Lamug (Hardcover)

A Lady's Guide to Mischief and Mayhem - by Manda Collins (Paperback)

Trouble with the Cursed - (Hollows) by Kim Harrison (Hardcover)