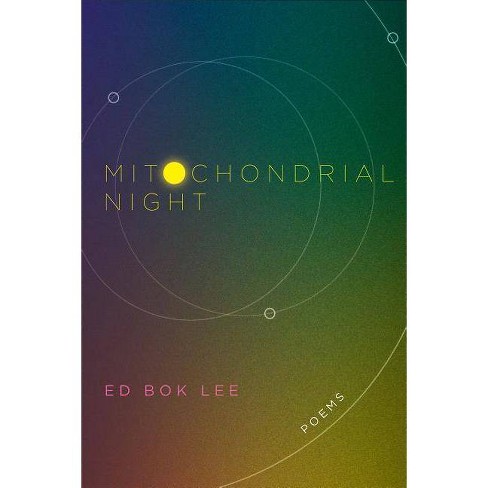 $10.99
MSRP$16.95
0 out of 5 stars with 0 reviews
be the first!be the first! ratings
Shipping
Free standard shipping with RedCard
Help us improve this page

"Winner of an American Book Award and a PEN/Open Book Award, Lee strikes a dizzying balance between the organic and the cosmic, the intimate and mythological." --Publisher's Weekly

"Like mitochondrion, from whence this exhilarating book's title comes, the poet's eye and spirit are ubiquitous, examining and probing the tangled bloodlines of our social and political networks, and the parasitic heft we are exerting on the world's chest. Formally protean and polyphonic, the poems change shapes and registers in a thrilling and often poignant chase after their truth. Ed Bok Lee's Mitochondrial Night is a thrilling book by a gifted poet at the height of his powers." --Khaled Mattawa

"The 'new kind of poetry' Lee forges is wide-ranging and hefty, with long poems knitting together exhaustive description with philosophical assertions while chronicling the past, examining the present and imagining the future." --Star Tribune

"In Mitochondrial Night, Ed Bok Lee takes us on an intimate journey through space and time, introduces us to people and places we have and have not met, to center us in our humblest humanity. Lee is a shaman, he rides with his pen into the vast darkness of our pasts, centers us in our present, and then makes the fearless leap into the imagined, the predestined future. He looks to raise from the dead the spirits of wars lost, wars long forgotten, the wars being waged now, and he does so with a light, lonely hand. This collection is explosive; it shatters the boundaries of self in the service of art." --Kao Kalia Yang

"A thought-provoking collection that dives into the immigrant and refugee experiences of Lee's parents as he envisions his daughter's future. Rooted in reality, the imagistic poems tackle the deep-rooted, long-term effects of colonialism that span generations." --Mpls.St.Paul

"The literary history of travel writing is also full of spectacular and critical turns, thanks to work by Monique Truong, Bani Amor, and Karen Tei Yamashita, among others, that confronts the legacies of empire, decolonizes tourism, and repurposes the genre to gather up communities forcibly split and scattered. Mitochondrial Nightis a dazzling continuation of this project." --Lantern Review Blog

"Lee's work is intuitively strong; the poems are well-crafted into a series of masterpieces that build on each other, creating a larger master work that reveals a world made up of individuals who endure, survive, and connect.” --Against the Grain

"There is a nomadic beauty to Ed Bok Lee's Whorled, which pulses with raw political anger and vital lyricism." --The Guardian

"These poems work in powerful concert to give body to an entire world of beauty, terror, loss, grief, and joy. The strength and magnetism of Lee's voice come from his mind's profound awareness of a person's embeddedness in a context simultaneously personal and archetypal; social, historical, political, and cosmic." --Li-Young Lee
If the item details above aren’t accurate or complete, we want to know about it. Report incorrect product info.