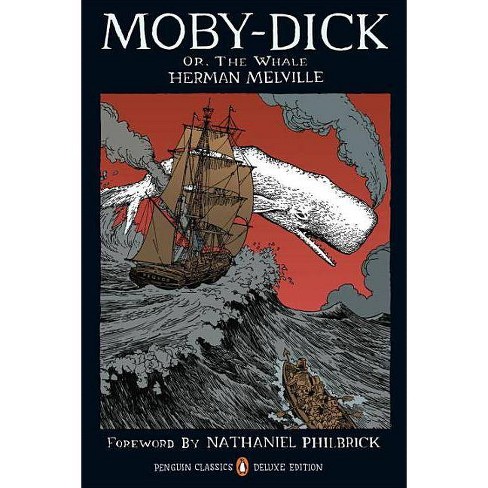 $12.89
MSRP$20.00
no reviews yet
be the first!be the first! ratings
Shipping
Free standard shipping with RedCard
Loading, please wait...
Help us improve this page

Herman Melville's masterpiece, one of the greatest works of imagination in literary history Over a century and a half after its publication, Moby-Dick still stands as an indisputable literary classic. It is the story of an eerily compelling madman pursuing an unholy war against a creature as vast and dangerous and unknowable as the sea itself. But more than just a novel of adventure, more than an encyclopedia of whaling lore and legend, Moby-Dick is a haunting, mesmerizing, and important social commentary populated with several of the most unforgettable and enduring characters in literature. Never losing its cultural presence, Melville's nautical epic has inspired many films over the years, including the film adaptation of Nathaniel Philbrick's In the Heart of the Sea, starring Chris Hemsworth, Cillian Murphy, Ben Whishaw, and Brendan Gleeson, and directed by Ron Howard. Written with wonderfully redemptive humor, Moby-Dick is a profound and timeless inquiry into character, faith, and the nature of perception. This Penguin Classics deluxe edition features a foreword by Nathaniel Philbrick and cover art by Tony Millionaire. This edition prints the Northwestern-Newberry edition of Melville's text, approved by the Center for Scholarly Editions and the Center for Editions of American Authors of the MLA. For more than seventy years, Penguin has been the leading publisher of classic literature in the English-speaking world. With more than 1,700 titles, Penguin Classics represents a global bookshelf of the best works throughout history and across genres and disciplines. Readers trust the series to provide authoritative texts enhanced by introductions and notes by distinguished scholars and contemporary authors, as well as up-to-date translations by award-winning translators.
If the item details above aren’t accurate or complete, we want to know about it. Report incorrect product info.