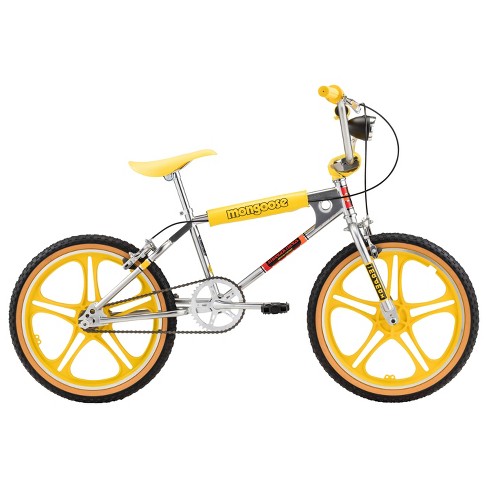 Pedal into the world of Stranger Things with this special edition Max bike. Modeled after the bike Max Mayfield rides in Season 3 of the show, this bike features tons of rad Mongoose BMX-design elements straight out of the 1980's. This includes its replica frame and fork, bright yellow 5-spoke alloy mag wheels, and the classic Mongoose pad set. Plus, the Max bike is loaded with show-inspired details, including the two rear axle pegs (where Eleven rides along), a headlamp for exploring the Upside-Down, and more! This bike's single speed drivetrain makes it easy to use and maintain, while the front and rear caliper brakes provide secure stopping power.

Whether you're just on your way to school, off to grab the high score at the arcade, or on a mission to save friends, fans will be able to bring the world of the Netflix Original Series Stranger Things to life with this special edition bike.
If the item details above aren’t accurate or complete, we want to know about it.

Q: If I have this item shipped, does it need to be assembled?

submitted by MH - 3 years ago

Q: What is the diameter of the bike tire?

submitted by MJ - 2 years ago

Q: What type of battery does the front lamp use? Is it included? In details of bike it says none required which is not considering the head lamp.

submitted by Jason - 2 years ago

Q: If I am picking this bike up at a store, will it be assembled?

submitted by Laf - 2 years ago

Q: Just curious,how many of these bikes were released?

submitted by Diaz - 2 years ago

Q: How long will it take to get to me

submitted by Daniel - 3 years ago
See all questions (6)

2 out of 5 stars
Would not recommend
Matt - 5 days ago, Verified purchaser
the quality control is so bad for this bike. I got two bike where the paint in the frames and decals were knicked up and damaged the second one I just decided to keep it cause I didn't feel like dealing with return it again. probably better off finding a actual 80s bmx frame of similar style and building this bike yourself
2.0
quality
out of 5
quality: 2 out of 5
3.0
comfort
out of 5
comfort: 3 out of 5
3.0
value
out of 5
value: 3 out of 5
Did you find this review helpful?

4 out of 5 stars
Lucy58489 - 3 years ago
originally posted on dorel_mongoose.com
Very cool bike, yellow color is awesome. The seat is very hard. The hand brakes were tough to use (maybe they have not yet been worn in) and it was a bit difficult to turn.
Did you find this review helpful?

this bike is not my style

2 out of 5 stars
malkin82650 - 3 years ago
originally posted on dorel_mongoose.com
My daughter is 8 years old, probably too young and not up for racing. So, she didn't love this bike. Handle bars too far from seat. Seat too hard. She thought it was a smooth ride and nice braking.
Did you find this review helpful?

5 out of 5 stars
Kyla84408 - 3 years ago
originally posted on dorel_mongoose.com
I honestly love this bike. It's awesome, totally worth it.
Did you find this review helpful?

5 out of 5 stars
CarterW68581 - 3 years ago
originally posted on dorel_mongoose.com
It is really good because the bike had really good brakes. I liked the hard yellow seat. I really liked how bright the bike was a fast and smooth. I zoomed past my big brother easily!
Did you find this review helpful?

5 out of 5 stars
Momo93318 - 3 years ago
originally posted on dorel_mongoose.com
Love this bike! It looks so cool, especially the wheels. It rides smoothly. Seat is very comfortable. Brakes are easy to use. This is the best bike I've ever been on.
Did you find this review helpful?

4 out of 5 stars
mario69781 - 3 years ago
originally posted on dorel_mongoose.com
It was good but more difficult to press the brakes and start off.
Did you find this review helpful?

5 out of 5 stars
Would recommend
RD - 3 years ago, Verified purchaser
I found out about this bike a little late and it was out of stock everywhere. I was patiently waiting for them to restock and almost gave up. This was actually a gift for me and I splurged on it. I remember the 80s bmx bikes and miss the design. There was no way I could pass up on this. Although yellow isn't my color, I still had to get it. It was well worth it to purchase! I love it and the yellow isn't that bad at all. I'm glad Target, Mongoose and Stranger Things put this out. I am so happy owning it. I can't stop staring at it. I want to buy another just case something ever happens to the one I have. :-) If they ever make one with blue mags I'm there! Go buy it you won't regret it!
4.0
comfort
out of 5
comfort: 4 out of 5
4.0
quality
out of 5
quality: 4 out of 5
4.0
value
out of 5
value: 4 out of 5
4 guests found this review helpful. Did you?

5 out of 5 stars
BoManiac - 3 years ago
5 stars but I would much rather have a Kuwahara E.T.
4 guests found this review helpful. Did you?

5 out of 5 stars
Would recommend
FromTheUpsideDown - 4 years ago, Verified purchaser
I was really excited when I found out that Mongoose was going to release a Stranger Things Special Edition of the Bike that Max has in Season 3. I was even more excited to find out that Target was going to offer them exclusively at their stores. Knowing that the odds were against me to get one because of the fact that there was going to only be 2 Available at each store, I had to act fast. I woke up early on the release date (6/30) and saw that my local store had one in stock. I instantly bought it. A about an hour later I got an email stating that it was ready for pick up. 15 minutes later i was there to get it. And there it was, behind the counter. I couldn't believe it! I actually got it! I confirmed Pick Up with clerk, and rode it out of the store. If there was any bike that captures the spirit of the 1980's and isn't actually from then, this is the bike to have! It's like Summer of 1985 when ever I ride it. Aside the stickers being exclusive to the Stranger Things bike, almost everything about it is near identical to an early '80s Mongoose. From the Yellow Pads, Seat and retro Frame, it's definitely the closest representation of a Vintage Mongoose. I'm so psyched that I got it because people are already selling them for nearly Triple the $219.99 store price, and they are all Sold Out! For the Price, it's a solid bike. I made a few adjustments as needed (seat, handlebars), and It's good to go. If you didn't get one, I'm very sorry. To those that did, Congratulations. I'm reliving my Youth all over again. Peace -T.C.
5.0
comfort
out of 5
comfort: 5 out of 5
5.0
quality
out of 5
quality: 5 out of 5
5.0
value
out of 5
value: 5 out of 5
7 guests found this review helpful. Did you?

Well worth the money

4 out of 5 stars
Would recommend
KissKrazy - 4 years ago
There are alot of haters that will review this bike but for a little over $200 this is a nice retro Mongoose BMX bike. Take a look online. Its sold out everywhere. For a bike that is built out of the USA, the welds are nice, wheels roll smoothly, and comfortable to ride. The pad set is cheaply made but that's my only negative find. Could mongoose have made this a little bit more like the one on the series? Of course but the price point would be much different. If you are looking for an inexpensive, cool retro bike, in my opinion, you cant beat this one!
5.0
comfort
out of 5
comfort: 5 out of 5
4.0
quality
out of 5
quality: 4 out of 5
5.0
value
out of 5
value: 5 out of 5
4 guests found this review helpful. Did you?

The ONLY bike you should ride into the upside down!

5 out of 5 stars
Would recommend
flynicy - 4 years ago
This bike is amazing! It's heavy on nostalgia. It instantly took me back to my childhood and all of the awesome BMX bikes growing up. By far the coolest bike of the stranger things series. This is a kids bike after all and not a competition ready bike. It's solidly built and the styling is really stands out. I felt like Cru Jones about to drop into HELLTRACK when I sat on it. I liked it so much I bought a second one!
4.0
comfort
out of 5
comfort: 4 out of 5
5.0
quality
out of 5
quality: 5 out of 5
5.0
value
out of 5
value: 5 out of 5
9 guests found this review helpful. Did you?