Mongrel Firebugs and Men of Property - by Steve Fraser (Paperback) 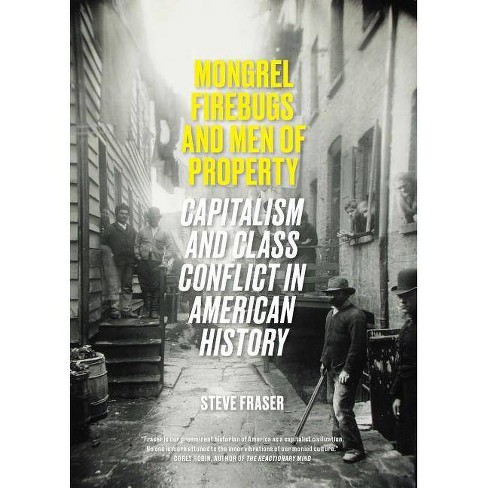 $20.99
MSRP$24.95
no reviews yet
be the first!be the first! ratings
Shipping
Free standard shipping with RedCard
Loading, please wait...
Help us improve this page

"Fraser is our preeminent historian of America as a capitalist civilization. No one is more attuned to the inner vibrations of our monied culture."
--Corey Robin, author of The Reactionary Mind "A spirited collection by an erudite and penetrating essayist. Fraser is an analyst of the culture of late capitalism and, among other things, he demonstrates with impressive clarity the connections between the economic changes we call neoliberalism and the psycho-cultural dramas generated by the siren song of faux populism."
--Frances Fox Piven, author of Poor People's Movements "Steve Fraser is our most incisive and encompassing cultural historian of the two gilded ages that structured American society and its economic ethos in the decades that have bracketed the nation's fleeting New Deal interregnum. Fraser has captured the emotive logic of capitalist hegemony and the dark appeal it has so often held for millions of acquiescent Americans."
--Nelson Lichtenstein, author of Who Built America? "In this collection of bracing essays, Fraser brings to the fore the perils and promise of class warfare and the daunting challenges faced by everyone who hopes to defy history and work for a just society."
--Jacqueline Jones, author of Goddess of Anarchy "These essays show that Steve Fraser has long been one of the wisest and most eloquent historians of American capitalism and its discontents. Erudite, passionate, and laced with wit, they are essential reading during our era of great perils and budding hopes for change."
--Michael Kazin, Professor of History, Georgetown University "One of our best social historians set the record straight about the mythologies of American capitalism."
--Peter Dreier, author of Place Matters: Metropolitics for the Twenty-first Century "[The essays] display his encyclopedic knowledge of US history, especially working-class history."
--Gabriel Winant, New Republic
If the item details above aren’t accurate or complete, we want to know about it. Report incorrect product info.