Monkey on the Run - by Leo Timmers (Hardcover) 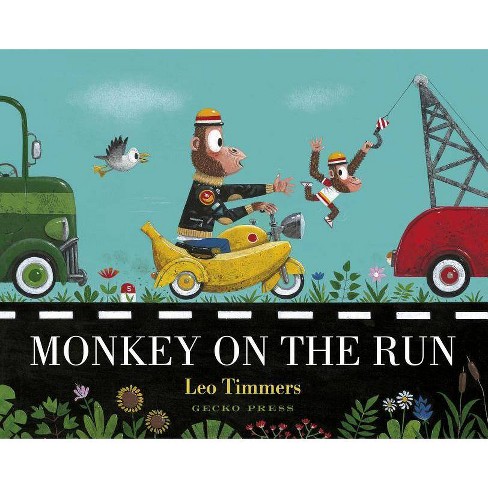 On a very busy street with traffic moving so slowly, Little Monkey loses patience and jumps onto a fire engine. Then he joins a TV crew, a garbage truck, an aquarium bus, a jewel thief's getaway carEEach vehicle in this wordless picture book contains a world of detail, activity and humor to share with curious toddlers. Full color.olor.

Papa Monkey and Little Monkey are on their way. But the street is very busy and they are moving so slowly! Little Monkey loses patience and jumps onto the fire engine. Up the ladder from there and he joins a TV crew! Then the garbage truck, an aquarium bus, a food cart for rabbits packed with carroty treats, Arctic animals traveling by snow globe, a jewel thief's getaway car . . .

There is so much going on in the street, it's become a playground!

Each vehicle in this wordless picture book contains a world of detail, activity and humor to share with curious toddlers. A New York Times Best Illustrated Children's Book!

In this wordless book originally published in the Netherlands, a monkey father picks up his child in a zippy-looking banana motorcycle and promptly gets caught in traffic. Rather than pout, the little monkey scampers out of the sidecar and into a series of adventures on the fanciful, Richard Scarry-esque vehicles ahead of them, swiping a pastry from a lion king's luxury vehicle and swinging along the clothesline of a mobile laundry. Timmers (Gus's Garage) lines up his marvelous wheeled contraptions along a single plane, the better for readers to savor all their eccentric details: a three-vehicle circus act includes a badger being shot out of a cannon; a bustling, water-filled 'Octobus' transports commuting sea creatures; and a series of taxis all convey similarly shaped cargo. Weathered textures lend each vehicle a comic gravitas, and the way the conveyances interact offers mechanical and character-based amusement. Through it all, the curious little monkey remains admirably cool and mischievously confident--and as delighted by the surroundings as readers will be.--starred, Publishers Weekly