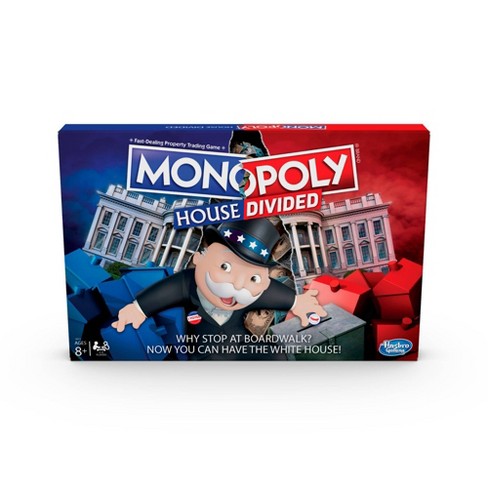 4.5 out of 5 stars with 39 reviews
3939 ratings1 Question1 Question questions
Help us improve this page

The Monopoly House Divided board game celebrates the ups and downs of an election campaign. Imagine being in the midst of it all with this exciting game for families and kids ages 8 and up. Players buy states, earn votes, and collect rent. Establish Campaign Headquarters to earn more votes. Executive Power cards and I Voted cards let players do a variety of things such as steal states or send opponents to Jail. Those lucky enough to get the White House token can double the rent they charge, and add more votes at the end of the game. When all the states are claimed, the candidate with the most votes wins!


The Hasbro, Hasbro Gaming, Parker Brothers, and Monopoly names and logos, the distinctive design of the gameboard, the four corner squares, the Mr. Monopoly name and character, as well as each of the distinctive elements of the board and playing pieces are trademarks of Hasbro for its property trading game and game equipment.