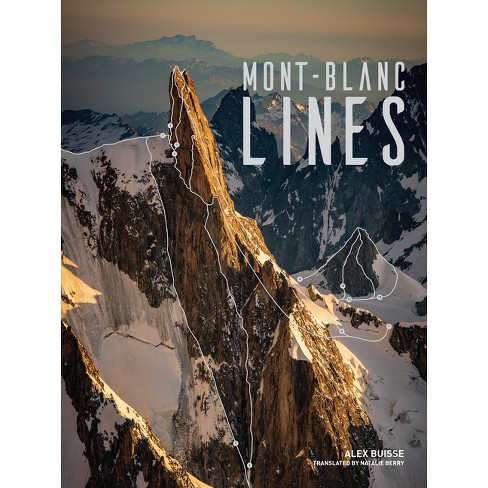 In Mont Blanc Lines, photographer and alpinist Alex Buisse has travelled the Mont Blanc massif to capture images of the major mountain faces and to trace the classic climbing and skiing lines. As well as Mont Blanc, also featured are the Grandes Jorasses, the Aiguille du Midi and more, as well as the Matterhorn and the Eiger in Switzerland.

In Mont Blanc Lines, photographer and alpinist Alex Buisse has travelled the Mont Blanc massif to capture images of all the major mountain faces and to trace the classic climbing and skiing lines. As well as Mont Blanc itself, also featured are other Alpine icons, including the north faces of the Grandes Jorasses and the Droites, the Aiguille du Midi, and the Grand Capucin.

Whether on the ground in crampons or on skis, or in the air by ultralight or paraglider, he has captured the majesty of the range so that he can tell the story of these classic lines and present them to us in the most stunning way possible.

Mont Blanc Lines features images taken during over a decade of mountaineering while Alex worked as a professional photographer based in Chamonix. Alex Buisse's story of these iconic mountain faces is mixed with the stories of climbers who have experienced great moments there. As a bonus feature, also included are the legendary faces of the Matterhorn and the Eiger North Face in Switzerland.

Alex Buisse fell in love with climbing and photography in his early twenties and the two fed each other: the need to climb bigger and wilder mountains so he could get better images, and the need to become a better photographer to do justice to the epic scenes unfolding in front of him. He has travelled the world as a professional photographer and has worked for many prestigious clients, including Patagonia, BMW, Red Bull, VISA, the International Olympic Committee, Sports Illustrated and GEO magazine. He lived and worked as a professional photographer in Chamonix for over a decade and has climbed, skied and flown all over the Mont Blanc massif - Mont Blanc Lines is the culmination of this work. He now lives in Canmore, Alberta, in the heart of the Canadian Rockies, with his wife and two children, but misses Chamonix too much to stay away for long, frequently travelling back to the French Alps. For more information about Alex and his work, visit www.alexbuisse.com