More Myself: A Journey (Hardcover) by Alicia Keys. 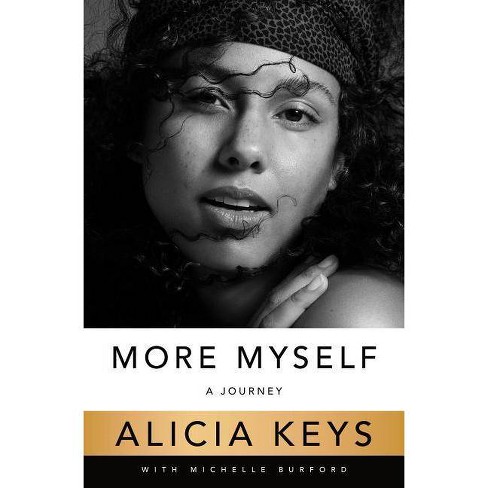 One of the most celebrated musicians of modern time shares her quest for truth--about herself, her past, and her shift from sacrificing her spirit to celebrating her worth. With the raw honesty that epitomizes her artistry, this work is at once a riveting account and a clarion call to readers to define themselves in a world that rarely encourages a true and unique identity.

An intimate, revealing look at one artist's journey from self-censorship to full expression

As one of the most celebrated musicians in the world, Alicia Keys has enraptured the globe with her heartfelt lyrics, extraordinary vocal range, and soul-stirring piano compositions. Yet away from the spotlight, Alicia has grappled with private heartache--over the challenging and complex relationship with her father, the people-pleasing nature that characterized her early career, the loss of privacy surrounding her romantic relationships, and the oppressive expectations of female perfection. Since Alicia rose to fame, her public persona has belied a deep personal truth: she has spent years not fully recognizing or honoring her own worth. After withholding parts of herself for so long, she is at last exploring the questions that live at the heart of her story: Who am I, really? And once I discover that truth, how can I become brave enough to embrace it? More Myself is part autobiography, part narrative documentary. Alicia's journey is revealed not only through her own candid recounting, but also through vivid recollections from those who have walked alongside her. The result is a 360-degree perspective on Alicia's path, from her girlhood in Hell's Kitchen and Harlem to the process of growth and self-discovery that we all must navigate. In More Myself, Alicia shares her quest for truth--about herself, her past, and her shift from sacrificing her spirit to celebrating her worth. With the raw honesty that epitomizes Alicia's artistry, More Myself is at once a riveting account and a clarion call to readers: to define themselves in a world that rarely encourages a true and unique identity.

ALICIA KEYS is a modern-day Renaissance woman--a 15-time Grammy Award-winning artist/songwriter/musician/producer, an accomplished actress, a New York Times bestselling author, a film/television and Broadway producer, an entrepreneur, and a powerful force in the world of activism. Since the release of her monumental 2001 debut album, songs in A minor, Keys has sold over 40 million records and built an unparalleled repertoire of hits and accomplishments. Keys resides in the New York City area with her husband, super-producer/visionary and entrepreneur Swizz Beatz, and their children.

MICHELLE BURFORD is a #1 New York Times bestselling collaborative writer and a founding editor of O, The Oprah Magazine. A native of Phoenix, she now resides in New York City.
If the item details above aren’t accurate or complete, we want to know about it. Report incorrect product info.