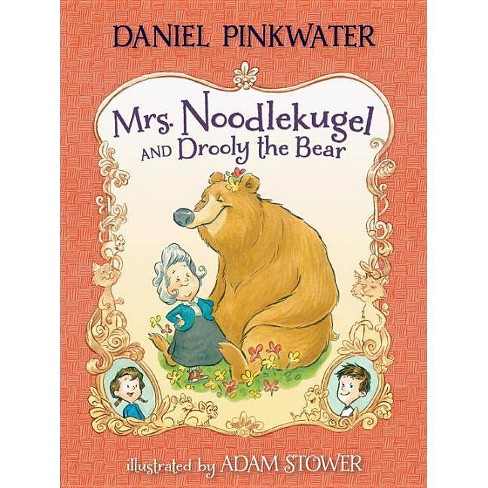 "Hilarious. . . . The book is a lot like life, but with more bears, as well as mice in nightshirts. . . . Utterly, endearingly ridiculous." -- Kirkus Reviews When their father decides to compete in the speed-knitting world championship, Nick and Maxine are happy to stay with their babysitter, Mrs. Noodlekugel, along with her talking cats and four mice who wear glasses. What they don't expect is a dripping-wet, whiskered man in the kitchen the next morning! Captain Noodlekugel has left his seafaring life to train animals for the circus, and he's even brought with him a hefty bear named Drooly for practice. When Drooly goes missing, the siblings must try to figure out where a big clumsy bear might go!

Fans of Mrs. Noodlekugel's delightfully wacky and whimsical world will rejoice in Pinkwater's newest offering.... Pinkwater presents another silly glimpse into the world of Mrs. Noodlekugel and her talking cats and mice.
--School Library Journal The appeal is the loopy conversations about sardines--and the pictures.... Utterly, endearingly ridiculous.
--Kirkus Reviews Abundant descriptions and eccentric humor showcase Pinkwater's considerable ability to entertain. The amusing line drawings support the story. Fans will be lining up for this one
--Booklist

Daniel Pinkwater is the wildly popular author of many books for children, including the Mrs. Noodlekugel series, illustrated by Adam Stower, and Bear in Love, illustrated by Will Hillenbrand. He is a well-known authority on children's books who appeared for many years on NPR's Weekend Edition and now appears on The Bob Edwards Show on Sirius. Daniel Pinkwater lives in Hyde Park, New York. Adam Stower has illustrated a number of children's books, including Bottoms Up! and Sing a Song of Bottoms!, both by Jeanne Willis. He lives in Brighton, England.
If the item details above aren’t accurate or complete, we want to know about it. Report incorrect product info.