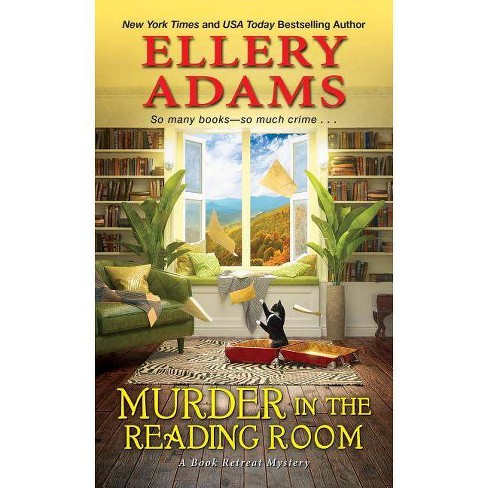 Storyton Hall, Virginia, is a book lovers' paradise for literary getaways. But manager Jane Steward is temporarily leaving for another renowned resort in hopes of solving a twist-filled mystery in the fifth installment of Adams' acclaimed series. Original.

Storyton Hall, Virginia, is a paradise for book lovers who come from all over for literary getaways. But manager Jane Steward is temporarily leaving for another renowned resort--in hopes of solving a twist-filled mystery . . . Jane's boyfriend is missing, and she thinks she may find him at North Carolina's historic Biltmore Estate. Officially, she's there to learn about luxury hotel management, but she's also prowling around the breathtaking buildings and grounds looking for secret passageways and clues. One of the staff gardeners promises to be helpful . . . that is, until his body turns up in the reading room of his cottage, a book on his lap. When she finally locates the kidnapped Edwin, his captor insists that she lead him back to Storyton Hall, convinced that it houses Ernest Hemingway's lost suitcase, stolen from a Paris train station in 1922. But before they can turn up the treasure, the bell may toll for another victim . . . "Readers will find themselves wanting to live in Storyton, no matter how many people end up dead there." --Suspense Magazine on Murder in the Locked Library

Praise for Ellery Adams' previous novels: Murder in the Locked Library "Creating a group of suspects that will keep readers intrigued until the last page, Ellery Adams has proven one thing with this book: this is one series that should and will go on for a long time to come. In fact, the author has done such a brilliant job, readers will find themselves wanting to live in Storyton, no matter how many people end up dead there." -Suspense Magazine

"Ellery does a wonderful job in capturing the essence of this whodunit with visually descriptive narrative that not only lend itself to engaging dialogue, but also seeing the action through the eyes of Jane and her fellow characters." -Dru's Book Musings

"In MURDER IN THE LOCKED LIBRARY...there is a very old pile of bones, an old book buried with the bones, and plenty more bodies are discovered. There are laugh-out-loud moments along with the serious which makes for a most enjoyable read. Avid readers will keep this novel on their keeper shelves! Ellery Adams is a marvelous writer; she intertwines famous quotes, famous authors, and famous books to create mystery magic."- RT Book Reviews TOP PICK

The Whispered Word A love letter to reading, with sharp characterizations and a smart central mystery.
--Entertainment Weekly The Secret, Book & Scone Society

"Adams launches an intriguing new mystery series, headed by four spirited amateur sleuths and touched with a hint of magical realism, which celebrates the power of books and women's friendships. Adams's many fans, readers of Sarah Addison Allen, and anyone who loves novels that revolve around books will savor this tasty treat."
--Library Journal (starred review), Pick of the Month

"Adams kicks off a new series featuring strong women, a touch of romance and mysticism, and both the cunning present-day mystery and the slowly revealed secrets of the intriguing heroines' pasts."
--Kirkus Reviews

"This affecting series launch from Adams provides all the best elements of a traditional mystery. . . . Well-drawn characters complement a plot with an intriguing twist or two."
--Publishers Weekly "Adams' new series blends magical realism, smart women, and small-town quirks to create a cozy mystery that doubles as a love letter to books. Readers will fall in love with Nora's bookstore therapy and Hester's comfort scones. Not to mention Estella, June, hunky Jed the paramedic, and Nora's tiny house-slash-converted-train-caboose . . . a book that mystery fans--and avid readers--won't want to put down until they have savored every last crumb."
--RT Book Reviews

Ellery Adams has written over thirty mystery novels and can't imagine spending a day away from the keyboard. Ms. Adams, a native New Yorker, has had a lifelong love affair with stories, food, rescue animals, and large bodies of water. When not working on her next novel, she bakes, gardens, spoils her three cats, and spends far too much time on Pinterest. She lives with her husband and two children (aka the Trolls) in Chapel Hill, NC. For more information, please visit www.elleryadamsmysteries.com.
If the item details above aren’t accurate or complete, we want to know about it.

Q: when did this book come out?

submitted by Rose - 4 years ago
See all questions (1)

The Vanishing Type - (A Secret, Book and Scone Society Novel) by Ellery Adams

5 out of 5 stars
Would recommend
Kim T - 4 years ago
Jane Steward is on her way to North Carolina to the Biltmore Estates where she believes her boyfriend Eric may be hidden. She is officially on a trip to learn more about luxury hotel management but she is really there to look for secret passages and clues to where Eric is hidden. While visiting one of the gardening staff Jane believes she may have found someone who can help her until he was found dead in his reading room. Jane not only finds Eric but she a lot more than she is expecting. When they return to Storyton Hall the mysteries continue, can Jane find the answers? I was so excited to read this book. This is one of my favorites series and this book is my new favorite in the series. Storyton Hall is a reader and book lovers dream. I would love to have a location like Hall to visit in real life. Jane her family, friends, and guardians are wonderful, interesting characters that make me smile while reading about their lives and the different events that are being celebrated at Storyton. The mystery is well written with a steady pace and several twists and turns along the way. I recommend this book to fans of Ellery Adams, cozy mysteries, and book lovers. I voluntarily agreed to read a copy of this book supplied by Netgalley. All thoughts and opinions are my own and in no way have been influenced.
Did you find this review helpful?