My Body - by Emily Ratajkowski 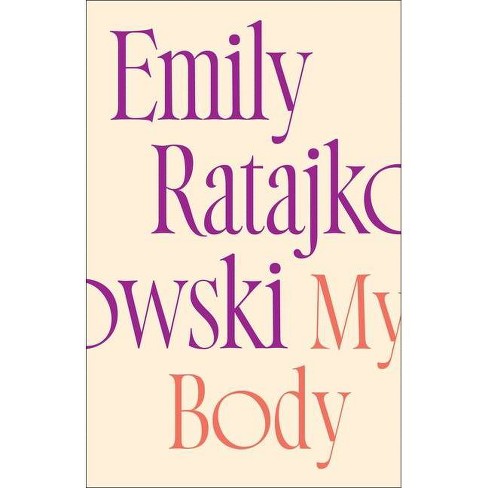 A deeply honest investigation of what it means to be a woman and a commodity from Emily Ratajkowski, the archetypal, multi-hyphenate celebrity of our time

Emily Ratajkowski is an acclaimed model and actress, an engaged political progressive, a formidable entrepreneur, a global social media phenomenon, and now, a writer. Rocketing to world fame at age twenty-one, Ratajkowski sparked both praise and furor with the provocative display of her body as an unapologetic statement of feminist empowerment. The subsequent evolution in her thinking about our culture's commodification of women is the subject of this book.

My Body is a profoundly personal exploration of feminism, sexuality, and power, of men's treatment of women and women's rationalizations for accepting that treatment. These essays chronicle moments from Ratajkowski's life while investigating the culture's fetishization of girls and female beauty, its obsession with and contempt for women's sexuality, the perverse dynamics of the fashion and film industries, and the grey area between consent and abuse. Nuanced, unflinching, and incisive, My Body marks the debut of a fierce writer brimming with courage and intelligence.

My Body is a memoir, but it's also a slow, complicated indictment of a profession and the people who propel it. Ratajkowski doesn't so much direct blame at any one person or organization as paint a personal picture of what it was like for her to be young, naive, ambitious, and smart--and to feel reduced, far too often, to a collection of body parts . . . [My Body] will deliver a more nuanced and introspective rendering of her interior than those who come to it with surface interests might expect.
--Vogue

"These powerful essays mark a blazing, unexpected literary debut. Emily Ratajkowski interrogates beauty, sex, power, objectification, fame, and betrayal, by both self and others, with lucidity and scorched-earth honesty. I read these pages, breathless with recognition and the thrill of reading a new voice telling it like it is."
--Dani Shapiro, author of Inheritance: A Memoir of Genealogy, Paternity, and Love Forget what you know about Emily Ratajkowski. In My Body, she investigates the double bind of sexuality and power with a skillful eye for nuance and a noteworthy fearlessness. These essays don't cut corners--we are all implicated in this web of misogyny and objectification, even Ratajkowski herself. For all the ways in which Ratajkowski's life is extraordinary, or the way in which these stories will shock readers, My Body thrives on moments when her experience as a woman--with its triumphs and missteps--is resoundingly universal.
--Stephanie Danler, author of Sweetbitter Emily Ratajkowski's first essay collection needs to be read by everyone. She explores body politics--and the politics of her body--through a uniquely feminist lens in stories that are both page turning and moving as hell.
--Amy Schumer, author of The Girl with the Lower Back Tattoo Reading My Body is to accompany an extraordinary individual and activist, one who is deeply passionate and thoughtful, as she navigates the joys and pains of life in a digital era. Our experiences may be different, but Emily Ratajkowski's presentation of diverse perspectives forges a path towards understanding.
--Tamika D. Mallory, co-founder, Untilfreedom In prose that is by turns honey smooth and vicious, uproarious and wounded, Emily Ratajkowski has captured the complicated terrain of having a body people want to sell while having her own agenda she refuses to give up. She knows the pain that lives in every woman and she isn't afraid to link arms and say she's been there, and that it hurts. This is the book for all women trying to place their bodies on the map of consumption versus control, and all who want to better understand their impulses. It left me much changed.
--Lena Dunham, author of Not That Kind of Girl

Emily Ratajkowski is a model, actress, activist, entrepreneur, and writer. She has starred in David Fincher's Gone Girl, among other films. Ratajkowski has also appeared on the covers of multiple magazines and walked the runway for numerous high fashion brands. Her 2020 essay for New York magazine, "Buying Myself Back," garnered over one million views within twenty-four hours, was hailed as a landmark, and was the magazine's most-read piece of the year. My Body is her first book.
If the item details above aren’t accurate or complete, we want to know about it.

My Body - by Emily Ratajkowski (Paperback)

Uncomfortable Conversations with a Black Man - by Emmanuel Acho (Paperback)

Heard It in a Love Song - by Tracey Garvis Graves (Hardcover)

The Shadows Between Us - by Tricia Levenseller (Hardcover)

This book was so good!

5 out of 5 stars
anonymous123 - 6 days ago, Verified purchaser
This book was so good I started reading it a second time! I love non-fiction books that are written like a story rather than just blurting out boring facts. Interesting to learn about her life too.
Did you find this review helpful?

5 out of 5 stars
Would recommend
Nilu Masroor - 4 months ago, Verified purchaser
nice compoliation of novels diving deep in the mind of a kind of person people might have opinions about but not really know
Did you find this review helpful?

My Body (is an Unwanted Vessel)

5 out of 5 stars
Would recommend
fergiefan101 - 10 months ago, Verified purchaser
Emily Ratajkowski is a queen. This book was a lovely reminder that you can be beautiful, skinny, successful, in love, rich, and famous, but still feel unfulfilled with life in a capitalist system. :)
2 guests found this review helpful. Did you?

5 out of 5 stars
Would recommend
Franny - 1 year ago, Verified purchaser
I like how honest Emily is about her past experiences, and with her younger self. A very personal look into the like of someone who most people want to be.
4 guests found this review helpful. Did you?

5 out of 5 stars
Would recommend
Chrissy - 1 year ago, Verified purchaser
This book is incredible. Emily’s brain and writing are beautiful. Her essays are heartbreaking but relatable and important for anyone who’s been affected by a society who profits off women’s bodies then condemns them for it. I was moved by her vulnerability, experiences, and references, and wanted to cheer her on because it felt like encouraging myself and every other woman I know. Rock on, Ratajkowski, and thank you.
3 guests found this review helpful. Did you?